This spiced apple cider recipe is a twist on a classic mulled cider.

Star anise and orange slices add warmth and freshness to this delicious drink.

When I was little, my mother would host a Christmas open house party every year. This was an opportunity for her to socialize with friends, family and coworkers in a relaxed, informal, way.

We would always have lots of food on the table (my mother's trademark for parties) and a simmering pot of delicious hot spiced apple cider on the stove.

The smell of apples, oranges and spices brings back feelings of warmth and comfort, and smells a thousand times better than any air freshener that you can buy from a store.

Not bad for a drink that takes very little time and effort to put together!

📖 Our Twist on the Classic Recipe

As I mentioned earlier, this recipe is a version of the classic mulled cider recipe.

Mulled cider is just sweet apple cider heated with spices and citrus to infuse flavour, resulting in a fragrant and tasty drink.

Our family apple cider recipe includes star anise - a spice that is sometimes used in mulled cider, but it's not as common as cinnamon and cloves.

As the name implies, star anise does have an anise-like flavour. Don't let that put you off, though!

It's not the same kind of liquorice flavour that you'd find in black jelly beans. It's a sweeter, more fennel-like flavour, and we use so few that you can't really taste it on its own.

We use star anise quite often in our holiday recipes, adding it to our hot cocoa, and a festive Caribbean drink called sorrel.

Please feel free to adjust the amount of spices in this recipe. For example, if you want the drink to be more spiced, you can add a few more cloves and more cinnamon sticks.

You could also just add orange peel instead of slices to the pot. Most of the flavour comes out of the peel anyhow - I just like the sweetness from the orange pulp so I throw the whole thing in there.

(Plus, it looks pretty.)

As for the apple cider, it's important to note that the word "cider" can refer to two very different beverages.

In most parts of the world, cider refers to hard cider, which is an alcoholic beverage. This is not what you want to use in this recipe!

The other kind of cider (sometimes called fresh cider, sweet cider or soft cider) is popular in Canada and the United States. It's basically unfiltered, unsweetened apple juice.

And yes, you can use one of those natural apple juices that are cloudy (not clear) for this recipe as well. Tropicana makes an apple juice that would probably work well here, in a pinch.

Check your grocery and local farm stands in your area to see what options are available to you, as there may be a local option you can buy.

🍎 How to Make Spiced Apple Cider

This is one of the easiest drinks that you can make.

All you need to do is combine store-bought sweet apple cider with spices that you enjoy, maybe some fruit, and simmer until it's all warmed through. That's it!

I like to make mine in a Dutch oven, but you could easily throw all of this into a slow cooker and set it on low heat for a few hours instead.

If you're planning on serving the cider right away, you can keep the pot on the stove over very low heat, or set your slow cooker to the keep warm setting.

I used to recommend wrapping the spices in a piece of cheesecloth before adding them to the pot, because it makes them easier to remove. But, honestly, it's just an extra unnecessary step that makes this recipe more complicated than it needs to be.

If the whole spices don't bother you, just throw them in as-is and be careful not to ladle them into the mugs at the end. You don't want anyone to accidentally swallow a whole clove!

You could also strain the mixture before serving.

The longer this spiced apple cider simmers, the better it tastes (up to a point).

I usually simmer mine for about 20 minutes, then take the pot off the stove. Once it has cooled down, I'll strain it into a pitcher and leave that in the fridge until I'm ready to serve it.

This cider will last in the fridge for a few days.

If you want to simmer your cider for a longer amount of time, just make sure your heat is very low so the cider doesn't evaporate too much.

Also, don't simmer it for longer than 1 hour or your cider may take on bitter notes from the spices.

Note: If you find that your cider has developed a scum or foam at the top, you can just skim that off before serving.

There are so many ways that you can flavour and garnish this recipe, and it's actually quite fun to play around with. Here are some popular ideas to get you started.

⏲ Make It Ahead of Time

If you want to make this in advance, you could infuse the spices into the apple cider, strain it, and then reheat it at the last minute. Here's what that would look like:

Make the recipe as written in a Dutch oven or slow cooker, excluding the orange slices. Allow the mixture to cool completely, then strain and discard the spices.

Pour the strained mixture into a pitcher and keep it in the fridge for up to two days in advance.

Right before your guests arrive, reheat the mixture on the stove along with some fresh orange slices and maybe a few spices for garnish. Make sure to simmer it just until it's warm and then reduce the heat to low. Your guests can serve themselves from the pot on the stove, for up to one hour.

Otherwise, simply reheat the mixture and pour into a thermal carafe to keep warm. You can garnish individual mugs with a cinnamon stick and/or a star anise, and maybe some little slices of clementines.

I hope you try making this spiced apple cider recipe! It's one of my family's favourite festive drinks, and I promise your house will smell SO good!

Can I Make This With Apple Juice?

Yes! This recipe create similar results with natural or "fresh pressed" apple juice, which is cloudy in appearance (not clear). Just be aware that the juice can be sweeter than sweet cider.

Can I Make This With Unsweetened Apple Cider?

Yes! If you have the option to purchase fresh unsweetened apple cider, and would prefer to have more control over the level of sweetness in this drink, please go ahead. You can sweeten the drink to your preference by adding white sugar to the mixture one teaspoon at a time.

What Brand of Sweet Apple Cider Do You Recommend? 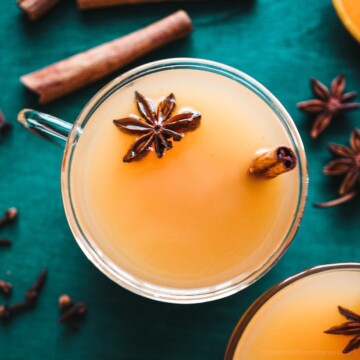 Make It Ahead of Time Make the recipe as written in a Dutch oven or slow cooker, excluding the orange slices. Allow the mixture to cool completely, then strain and discard the spices. Pour the strained mixture into a pitcher and keep it in the fridge for up to two days in advance. Right before your guests arrive, reheat the mixture on the stove along with some fresh orange slices and maybe a few spices for garnish. Simmer just until it's warm and then reduce the heat to low. Your guests can serve themselves from the pot on the stove, for up to one hour. Otherwise, reheat the mixture and pour into a thermal carafe to keep warm. You can garnish individual mugs with a cinnamon stick and/or a star anise, and little slices of clementines.

This recipe was originally published on Nov 17, 2017. It has since been edited for clarity and new information has been added.