This apple crisp recipe is so easy – you don’t even have to peel the apples! The crunchy oat pecan topping makes this crisp extra delicious.

Nothing says fall like the cozy smell of warm apples and cinnamon. I mean sure, there’s the whole pumpkin spice thing, but apple cinnamon is my favourite flavour combination for this time of year.

I love spiced apple cider, apple pie, apple turnovers… mmmm! So it makes sense that this apple crisp with oats and pecans is one of my favourite recipes for fall too.

The combination of juicy apples, brown sugar, cinnamon and a touch of nutmeg is pretty tasty on it’s own, but once you add that buttery layer of crunchy oats and toasted pecans on top, it’s heaven!

This recipe is actually a revamp of a very simple apple crisp recipe that I came up with back in 2013. It was OK… but my cooking skills have definitely improved since then, so I wanted to make this apple crisp more flavourful and fun to eat.

Before we get started, you should know that this is a pretty light apple crisp – so it’s not going to hold together as well as recipes that have more sugar, and have flour in the apple mixture.

Secondly, you don’t need to be super exact with the measurements in this recipe. This is one of those rustic recipes that you really can’t mess up.

If you want to keep things simple, you can omit the pecans in the topping and just use oats. You can also skip the nutmeg and other “secret ingredients” that I’ve added (more on that in a minute), and still have a really tasty apple crisp. 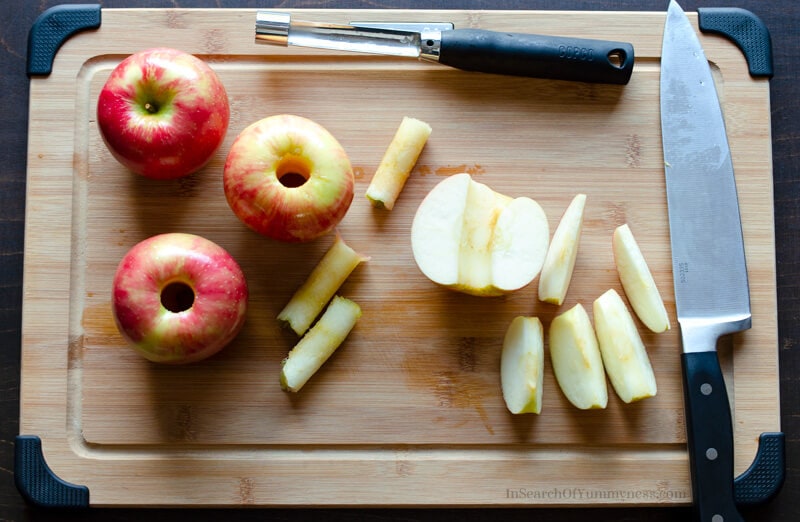 The first, and probably most important element of this dish is the apples. You can use your favourite snacking apple, or combine apples to create a balance of sweet and tangy flavours.

I used just Honeycrisp apples when I photographed this recipe, but you could use SweeTango apples (which have a nice balance of sweet/tangy flavours), or do Honeycrisp + granny smith, or Cortland + Mcintosh etc.

Use whatever tasty apples are available in your area. I have a particular hatred for red delicious apples though, so those are pretty much the only ones that I don’t recommend using.

Once you’ve got your apples home, give them a really good wash. We’re keeping the skins on in this recipe, so you want to make sure they’re really clean before you get to chopping!

All I did with these was remove the core, then cut them into about 1-inch chunks. I used to do slices, but this way is faster and I actually like having thicker pieces of apple in the crisp. 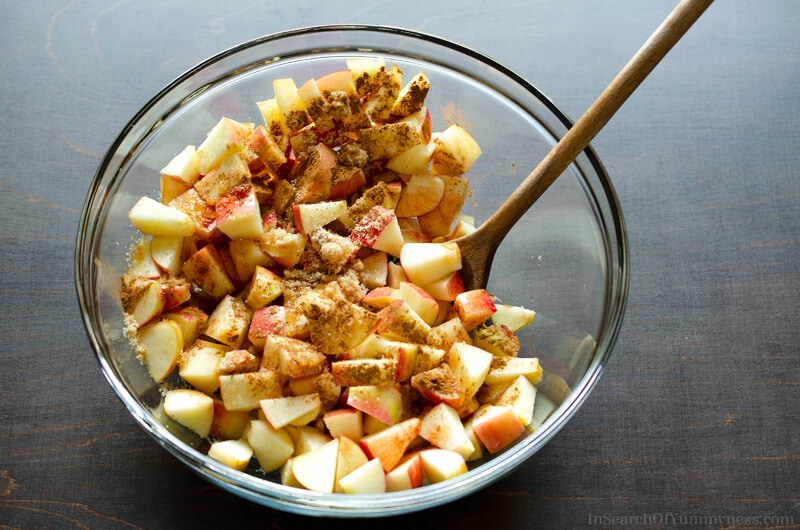 As I mentioned before, this recipe has a few “secret ingredients” that add a ton of flavour to this apple crisp recipe. The first one is Angostura bitters, which you might already be familiar with if you make cocktails at home.

Angostura bitters is an aromatic bitters product that is created from a blend of herbs and spices. It’s most well known as a key ingredient in popular cocktails like an Old Fashioned, but it can be a tasty addition to cooked dishes too.

I like to add a teaspoon to my apple crisp to bump up the flavour of the spices, but you can definitely leave it out if you want to.

I did add a tiny amount of lemon juice to my apples to add some acidity and prevent browning, but if you’re using really tart apples you might want to either reduce or omit the lemon juice, or your apple crisp will turn out too sour. 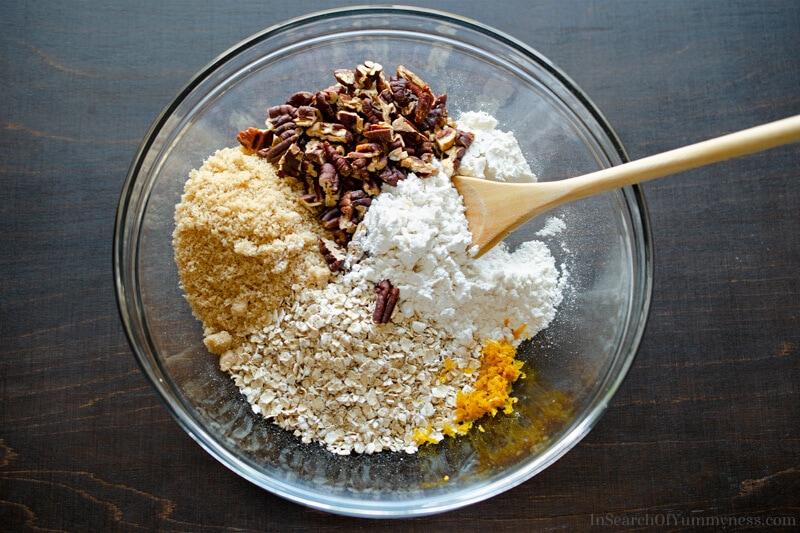 The other “seceret ingredient” in this apple crisp recipe is fresh orange zest, which gets added to the oat pecan topping.

This is a trick that I picked up from one of the kitchen staff members when I was working on The Main. One of the ladies had added it to an apple crisp recipe she was testing in the kitchen, and I was so in love with the flavour that I’ve been adding it to my crisps ever since.

That little bit of citrus adds a fresh bright flavour to the dish, and it smells amazing too. I think lemon zest would be too strong, so if you don’t have an orange/clementine/tangerine you can just leave it out.

Once you mix together the oats, pecans, flour, brown sugar, and zest, the next important thing to do is add the butter. 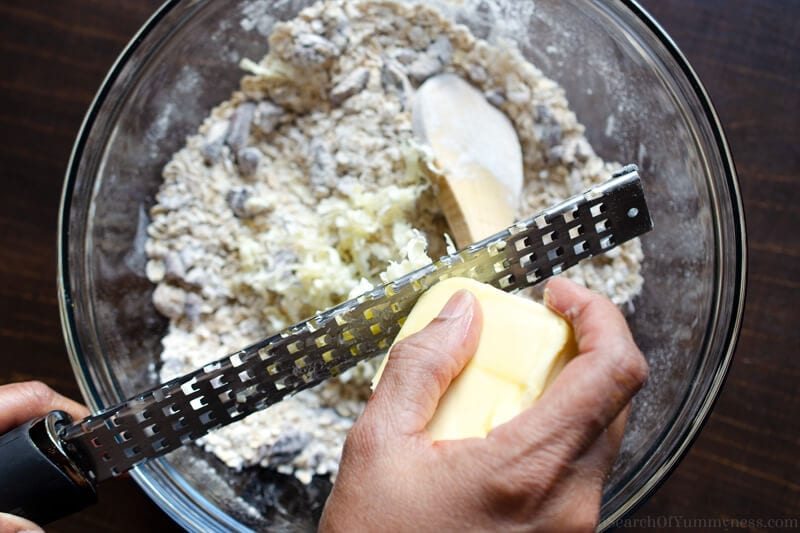 Personally, I think the easiest thing to do is to measure out a 1/3 cup of butter and stick it in the freezer. This allows the butter to firm up enough that you can grate it into flour, and work it in with your fingers without it completely melting.

This is a trick that people use when making biscuits and pie dough, and it works well here too.

If you’d rather not go through that process, you can add cold or room temperature butter to the mix and work it into the flour with your fingers, a fork, or a pastry cutter.

I find the topping crisps up better when there’s little bits of butter in the mix, instead of adding melted butter which makes everything a bit wet to begin with.

That being said, if adding melted butter is easier for you, go for it. As I said earlier, you really can’t mess this up. 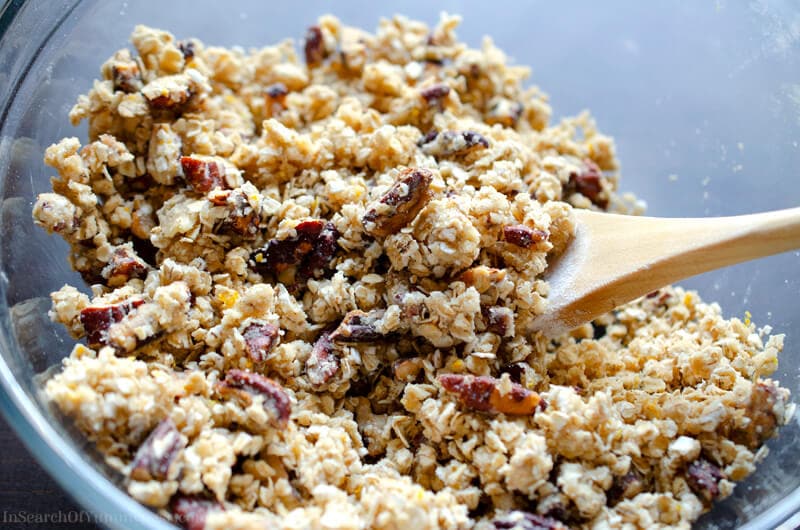 Once you work in the butter, you should have a somewhat sandy texture from where it clings to the flour. The mix will look a bit crumbly – this is what you want.

Adding the butter is the very last thing that you want to do before assembling the crisp, so make sure you’ve got your pan ready to go ahead of time so the butter doesn’t have time to sit and melt. 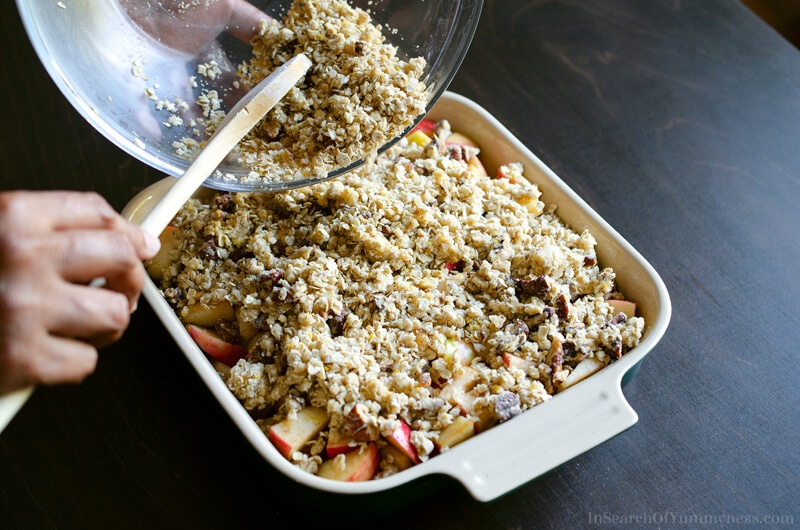 I used to go through the trouble of buttering my dish, but I skipped that step when I was testing this recipe, and my apple crisp didn’t stick on the pan once!

That’s one less thing to do, which means this crisp goes from bowl to oven to my belly that much faster.

All you have to do is dump in the apple mixture, spread it out, then top it with the oat pecan topping. Then it goes straight into the oven for 45-50 minutes so the apples can cook down, and the oats can crisp up.

I baked mine in the middle of the oven, but if you find the oats are browning too quickly, you can move the crisp down to your bottom rack to finish cooking.

I like to let everything cool down a bit once it’s out of the oven, so the crisp can firm up a little bit, then I serve it warm with vanilla ice cream.

The leftovers are great the next day with Greek yogurt for breakfast, or with ice cream or whipped cream again for another round of dessert.

I hope you enjoy making this recipe!

Apple Crisp with Oats and Pecans

Assemble and Bake the Crisp:

Apple Varieties: Serve with vanilla ice cream, whipped cream or vanilla Greek yogurt.  This apple crisp does not have any flour in the apple mixture, so you may find that it does not hold together the same as other apple crisp recipes you may have tried.  Please note that the nutritional information for this recipe is only an estimate, and has been calculated using a plugin.

Calories: 582kcalCarbohydrates: 86gProtein: 6gFat: 26gSaturated Fat: 11gCholesterol: 41mgSodium: 87mgPotassium: 370mgFiber: 8gSugar: 52gVitamin A: 571IUVitamin C: 9mgCalcium: 61mgIron: 2mg
Have you made this recipe?Leave a review in the comments below!

Disclosure:
This is not a sponsored post.
This post contains Amazon affiliate links. I am a participant in the Amazon Services LLC Associates Program, an affiliate advertising program designed to provide a means for content creators to earn fees by linking to Amazon and its affiliated sites. This means that if you click a link and purchase something, I will receive a tiny percentage of the purchase price (at no extra cost to you). Thank you for supporting this website!

I share tasty recipes and gardening tips for beginners. Why don't you grab a cup of tea and stay a while? I appreciate you being here!