Mexican corn cups (a.k.a. esquites) are so easy to make!

This healthy snack is loaded with flavour from lime, mayonnaise, Cotija cheese and grilled corn.

There's not much that beats the flavour of fresh grilled corn in the summer. Eaten with a smear of salted butter, it's easily one of the best summer eats you can have.

There's something about the sweet/charred flavour combo that just makes grilled corn so satisfying!

I can't eat grilled corn off the cob anymore though (the joys of having a crown on a broken front tooth!), so I decided to cut the kernels off and make a version of the the Mexican corn snack in a cup known as esquites, or elote en vaso (corn in a cup).

When I went to Mexico a couple of years ago, I tried esquites for the first time. The version from the snack bar on the resort was basically boiled corn placed in cups with mayonnaise, Cotija cheese and chili powder.

It should have been good, but what arrived was a tiny spoonful of corn topped with a mountain of mayonnaise and cheese.

I suspected that what I had been given was far from the real deal. Resort food is rarely a good representation of any country's cuisine.

Earlier this year I decided to try esquites again, this time from a popular Mexican restaurant in my area.

They called their dish a Mexican Street Corn Cup. This version was infinitely better than what I had at the resort in Mexico.

I decided that I wanted to try making the dish at home, using grilled corn instead of boiled or sautéed corn.

After doing some research, I found that sometimes Mexican corn stands will make esquites with grilled corn and then top them with mayonnaise or a creamy product called crema.

I did find crema at my local Mexican grocery, but it can be tough to find so I decided to make my Mexican corn cup recipe with mayonnaise instead.

🛒 Tips for Buying Corn on the Cob

When it comes to buying corn, your best bet will always corn from a farm stand. The sugars in corn begin to convert into starches from the moment it's harvested, so the fresher the corn, the sweeter the flavour.

In Canada, the only corn we have available for most of the year is packages of partly-husked ears (shown above).

These are never as nice as the whole ears of husk-on corn that show up in huge boxes at the grocery in the middle of summer, but you can make them work.

🧀 What is Cotija Cheese?

For the cheese, I used Cotija cheese which is a crumbly Mexican cheese made from cow’s milk. It's similar to Feta cheese, but it's far less salty and has a milder flavour overall.

I bought my Cotija cheese from a family-owned Mexican grocery store, but I've been told that Whole Foods and Sobey's may have it as well.

If you can't find it, you can use Feta instead, but be sure to add less salt to the recipe (you might not need any).

This recipe is actually really simple when you break it down. You're basically going to husk your corn, grill it, create the sauce, mix it together with the corn and serve it. Simple!

The hardest part is finding the ingredients, but if you don't mind substitutions you should be able to get everything at your local supermarket.

🌽 Tips for Cooking Corn on the Cob

To roast corn on the cob, you can remove the silk and wrap them in tin foil for tender corn, or remove the husks and silk completely and grill them directly for chewier charred kernels.

Grilling fresh husked corn takes about 10 minutes, but corn wrapped in foil or left in the husk will take almost twice as long.

If you'd rather boil your corn, add your cobs to salted boiling water and cook for 3-5 minutes. Fresh corn will take about 3 minutes to cook, older corn takes twice as long.

If you're boiling corn that isn't very fresh, you can add a bit of sugar to the water to boost the sweetness of the corn. About 2 tablespoons of sugar in 4 quarts of water should work if you don't want it to be overly sweet.

Options for Roasting the Corn

You can roast your corn on either a gas grill or charcoal grill, whichever you prefer.

If grilling outdoors isn't an option, and you don't have a grill pan, you could pan-sear your corn instead.

You have a couple of options for how you grill the corn as well. You could wrap your corn in foil (or leave it in the husks with the silks removed), or roast the bare corn directly on the grill grates.

For this recipe, I prefer the chewy texture of corn that is cooked directly on the grill. The charred flavour is a bonus that works really well against the creaminess of this dish.

That being said, if you're worried about overcooking your corn, you can cook it in tin foil or in the husk first (which will take about 16-20 minutes), then unwrap them and char the cobs on the grill.

🔪 How to Cut Corn Kernels off the Cob

There's no wrong or right way, just do what's easiest for you (and keep your fingers out of the way!).

If you're really strapped for time, you can even make this recipe with frozen corn.

To Make Recipe with Frozen Corn:

🥣 How to Assemble the Mexican Corn Cups

Once you've finished grilling the corn and cutting off the kernels, it's all downhill from there.

You're just going to mix your mayonnaise, lime juice and chili powder together, add the corn, and then get ready to assemble the cups.

Make Ahead: If you want to make this dish ahead of time for a party, you can grill the corn, cut off the kernels and store them in the fridge for later. You can make the mayonnaise mixture ahead of time too, but leave everything unassembled until the last minute.

If you want do, you can add a bit of sour cream for tanginess or throw in some cayenne pepper if you want to make it spicy. The recipe is pretty flexible that way.

If you don't want to serve the corn in cups, you can use small bowls instead. The idea is just to layer the corn mixture with the cheese so you can get a bit of everything in each bite.

If you want to be fancy, you can decorate the tops of your Mexican corn cups with extra chili and a little cilantro but the dish is just as tasty without all of the garnishes.

I do like to serve this with lime wedges though, because the acidity helps to cut through the richness of the mayo and cheese.

If you end up making this dish, let me know how it turned out in the comments below! 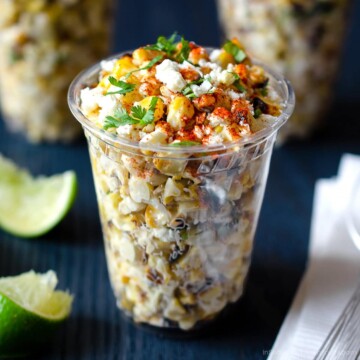