Make your own coffee-shop worthy cocoa at home with this easy spiced hot cocoa recipe!

Cinnamon and nutmeg adds festive flavour, but it's the star anise that makes this warm drink extra special.

Once the cooler weather hits, I start to crave all the warm drinks that Starbucks and Tim Horton's have to offer. Those hot cocoas, hot chocolates and fancy flavoured coffees always sound so enticing!

I mean who doesn't want a Caramel Brûlé Latte or a Candy Cane Hot Chocolate?

I'm sure it has to do with how these drinks are marketed, but drinking them makes me feel like I'm actively taking part in the holiday season.

The problem is that these drinks are LOADED with sugar.

A tall Caramel Brûlé Latte from Starbucks, with 2% milk and whipped cream, has 42 grams of sugar (and 54 grams of carbs). For reference, that's more than a can of Coke (at least here in Canada).

While I used to enjoy both of those drinks once in a while, I try to avoid them now that I'm pre-diabetic.

If I want a fancy coffee-shop drink, I have to figure out how to make my own version at home. That's where this spiced hot cocoa recipe comes in.

I wanted to create a hot cocoa drink that I could enjoy at home during the holidays.

For my recipe, I chose warm spices that remind me of Christmas: cinnamon, nutmeg and star anise.

We use star anise at home in soup broths, hot apple cider and in a Caribbean holiday drink called sorrel. So to me, star anise is a holiday flavour.

It does have a slightly bitter liquorice flavour, though. If that's not a flavour that you like you can leave it out or substitute it for another warm spice.

For example, Mexican hot chocolate also has cinnamon, but some people add a pinch of cayenne as well, so that's something you could experiment with.

This sweet drink pairs really nicely with a salty snack, like spiced nuts, popcorn or a cheese ball with crackers!

If you'd rather enjoy it with something sweet, I'd recommend peppermint hot chocolate cookies, coconut shortbread cookies or chocolate pecan pie.

What's the Difference Between Hot Cocoa and Hot Chocolate?

While we often use those names interchangeably, there are several differences between hot cocoa and hot chocolate.

Hot chocolate is thick, rich, hot drink made from melted shaved chocolate and whole milk or cream. This drink gets its sweetness from the sugar in the melted chocolate.

Hot cocoa is thinner hot drink made from cocoa powder, which is usually sweetened with sugar. You can either make it from scratch, like I am here, or you can make it from a hot cocoa mix (otherwise known as instant cocoa).

Since this recipe is made with cocoa powder, and not chocolate, I'm calling it spiced hot cocoa.

Which Cocoa Powder Should You Use?

To make a delicious cup of hot cocoa from scratch, you need to use Dutch-processed cocoa powder. If you haven't heard of that before, it might sound fancy. But chances are you might already have this in your pantry!

Many popular brands offer a Dutch-processed variety of cocoa powder.

So what does Dutch-processed mean?

Dutch-processing raises the pH of the cocoa to 7 (neutral) or 8 (basic/alkaline), which creates a mild (less bitter) flavour and a darker colour.

How Much Sugar Should You Add?

I used a ratio of 1:1 for the cocoa powder and light brown sugar in this recipe, because it creates the amount of sweetness that most people will want from hot cocoa.

When I make this for myself, I cut the sugar down a bit as I prefer my drinks to be less sweet.

How to Dissolve Cocoa Powder

Technically, you could just toss all of the ingredients into a pot, mix the, heat it up and call it a day. I did that the first time I tested this recipe, and the result was fine.

However, I noticed on the Fry's cocoa can that they recommend dissolving the cocoa and sugar in a small amount of cold milk before adding the hot milk, so I tried that.

I found that by dissolving the cocoa and sugar in a bit of cold milk first, the resulting hot cocoa was smoother and well-incorporated.

So if you have time, try following the extra step and see if it makes a difference to you.

How to Avoid Skin Forming on the Milk

Another point to make note of is that you might end up with a skin on your milk once you take the cocoa mixture off the heat.

This is normal, and happens often when you heat milk up and then let it cool down again without stirring.

To avoid getting a skin on your cocoa mixture, be sure to continue stirring it occasionally after you remove the pot from the heat. Keep giving it a stir here and there as it cools down, and you should be able to avoid forming a milk skin.

If you do get skin, and the film bothers you, you can skim it off. Otherwise, I just whisk it back into the drink and it usually melts away (but I don't mind any clumps that stay behind either).

🌶 Adding Spices to Your Cocoa

Cinnamon and nutmeg are classic warm spices, and if that's all you have on hand, you could just use those and still have a really nice cup of cocoa.

I prefer to use whole cinnamon sticks instead of ground cinnamon, because the sticks don't leave a grainy residue on the bottom of your cup. However, you can absolutely make this recipe with ground cinnamon if you want to. I would add half a teaspoon and taste the mixture before deciding if you want to add more or not.

If you decided to use the star anise, keep in mind that the longer you leave the pods in the liquid, the stronger the flavour will be. 15 minutes will give you a mild liquorice flavour, whereas 2 hours (in the fridge!) will create a pleasant but more intense taste.

Also, it's important to note that star anise pods are not edible! Much like the cinnamon sticks, you wouldn't want to eat them whole. Dried pods can be grated, but otherwise you just use them to infuse flavour into recipes.

You can experiment with adding hot spices to your cocoa, like cayenne, but keep in mind that a little goes a long way.

Be careful with chilli powder, as some of them are actually blends with oregano and other ingredients that would not work well in cocoa!

Regardless of which spices you choose to infuse into your cocoa, be sure to remove and discard them after the 2-hour mark, at most. Any longer, and your cocoa is likely to taste bitter and unpleasant.

The best part of hot cocoa is the toppings!

I'm a whipped cream person myself, but I won't say no to a handful of mini marshmallows.

A dusting of cocoa and/or ground cinnamon can be really nice, or you could stir the whole thing with a candy cane and see if that's a flavour that you enjoy.

(I sometimes stir my orange pekoe tea with a candy cane around Christmastime - it's good!) 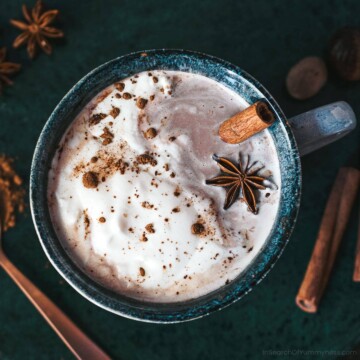 For mildly spiced hot cocoa: don't let the mixture sit with the spices in it for more than 15-20 minutes. You can remove the spices and leave the mixture on the stove if you will be serving it immediately.  For strongly spiced hot cocoa: after simmering for 10 minutes, remove the pot from the stove and allow it cool down. Then pour the liquid into a bottle or pitcher, leaving the spices in the mixture, and set it in the fridge for an hour or two. Remove from fridge, remove and discard the spices, and reheat before serving.  Variations and Substitutions:

This recipe was originally published in 2020. It has since been edited and republished.