Orange, allspice and a touch of almond extract transforms this easy plum cobbler into a special dessert that's worthy of your holiday table.

They have all the flavour of a good pie, but are significantly easier to make (in my opinion).

For this recipe, I started with a basic plum cobbler and added flavours that made me think of Christmas: orange, allspice and almonds.

While you can absolutely enjoy this any other time of year (plums are particular nice here in the fall), the flavour profile of this dessert makes it well-suited to the holiday season.

There are two main components to this Christmas cobbler recipe: the fruit filling and the biscuit topping.

For the fruit filling, I used sliced plums and chopped apples.

While plums are delicious on there own, I've found that adding an apple adds a nice amount of acidity to the dish.

This is something that I've discovered while making cobblers, crumbles and crisps. It's important to get that sweet-tart balance right, otherwise it will just taste kind of... flat.

There are many types of plums in the world, but the kind that you use doesn't really matter. What's important is that it's ripe, but not overripe.

I used red plums when I developed this recipe, because that's what was in season. In Canada, you're more likely to find blue plums from Autumn into early winter.

Imported Italian plums (also called European plums) are another great option because of their inherent sweetness. These are the kinds of plums that are usually dried into prunes.

For the apple, I recommend using a variety that is a bit tart (like a Northern Spy apple) to balance out the sweetness of the plums.

That being said, if you find that your plums are a bit on the sour side, you could use a sweeter apple instead.

Once you've sliced and chopped your fruit, it's just a matter of adding brown sugar, cornstarch, almond extract, Triple Sec and allspice.

If you want to omit the Triple Sec, you can. I just like how it bumps up the orange flavour in this cobbler recipe.

I also opted to use allspice because it tastes like cinnamon, clove and nutmeg. I like using it because I only have to measure one ingredient instead of three.

If you're not familiar with allspice, it's actually the dried berry of the Pimenta dioica plant - not a spice blend.

If you don't have allspice, you can make a blend that tastes similar.

Making the dough for the topping might seem like it could be tricky, but it's not difficult at all. The key is to keep your butter cold until you're ready to add it in.

Some people cube their cold butter before adding it to the flour, but I prefer to grate it.

Either way will work.

When you get to the part where you rub the butter into the flour mixture, try to work quickly. You don't want the heat of your hands to melt the butter, and you don't want to overwork the dough.

I just like the process of rubbing the butter into the flour, and I think it's a bit faster to use my hands.

Regardless, you want to make sure the butter is cold and breaks into tiny pieces. It's those cold bits of butter that make the biscuit flaky, so you want to preserve them as much as possible.

Once you have a sandy texture, you're read to move on to the next step.

The combination of orange, allspice and almond is really what makes this a Christmas cobbler to me.

Adding the orange zest is optional, but it does add beautiful orange flecks and bright orange flavour to the biscuit topping.

I've seen recipes where milk is used to moisten the biscuit dough, so if you don't have cream, you can use milk instead.

I found that my biscuit topping turned out much fluffier and softer with cream, though.

Once you add the cream, you need to stir it in just until the dough becomes moistened, and then stop.

Don't go crazy with mixing the dough, or you'll end up with tough biscuits.

🥧 Putting It All Together

To assemble this Christmas plum cobbler, layer the fruit mixture into a cast-iron pan or a heavy baking dish.

Top with loose clumps of the biscuit topping, then sprinkle everything with coarse sugar.

If you don't have coarse sugar, you can leave it out. I just like the sparkle and crunch that is adds to the cobbler topping.

The cobbler takes 40-45 minutes to cook through.

I found that my biscuit topping browned very quickly, so I like to move it from the middle rack to the bottom rack of the oven for the last 5-10 minutes.

🍨 How to Serve It

While all fruit cobblers are best served warm, I found that the leftovers do heat up well enough the next day.

I enjoy this plum cobbler with a scoop of vanilla ice cream, but it's also pretty good with whipped cream the next day if you eat it at room temperature.

I love that this recipe is simple to make, but tastes like Christmas. It's a super easy dessert to throw together to serve at the end of your holiday meal, or just to enjoy while snuggled up on the couch with your favourite movie.

If you end up making this recipe, let me know how it turns out! You can also give it a rating by clicking on the stars below. 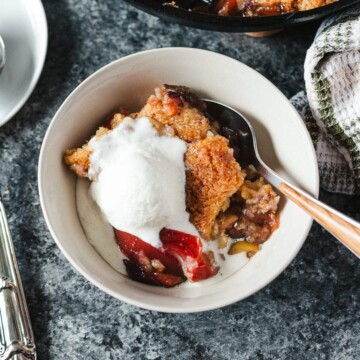 The type of plum you use in this recipe doesn't matter. What's important is that it's ripe, but not overripe. For the apple, I recommend using a variety that is a bit tart  (like Northern Spy) to balance out the sweetness of the plums. That being said, if you find that your plums are a bit on the sour side, you could use a sweeter apple instead. When you get to the part where you rub the butter into the flour mixture, try to work quickly. You don't want the heat of your hands to melt the butter, and you don't want to overwork the dough. Alternatively, you could use a pastry cutter or a fork to work the butter into the flour.

This blog post was originally posted on Dec. 17, 2020. It has since been republished with updated images and added details.