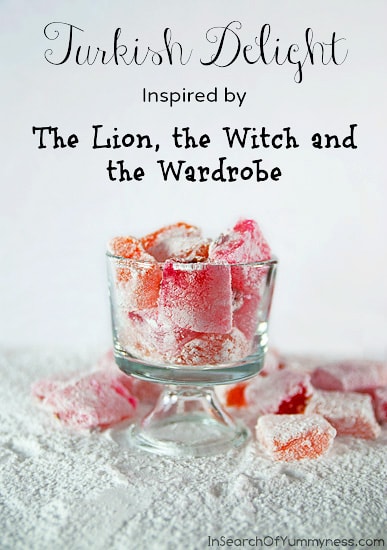 The Chronicles of Narnia has been one of my favourite book series since I was in the third grade. Back then my teacher, Mr. Swan, had introduced our class to the second book in the set: The Lion, the Witch and the Wardrobe

and I was hooked. I loved the vivid descriptions of Narnia, and could relate to the character's feelings of being displaced because I had just moved to a new school.

Now that I'm older, I can also appreciate the detailed descriptions of food that are in these stories. It turns out that C.S. Lewis was something of a foodie himself! In his book Surprised by Joy he wrote, "...eating and reading are two pleasures that combine admirably," which is a philosophy that I appreciate and agree with.

I hope you enjoy this post and the accompanying recipe for Orange Pine Nut and Coconut Pistachio Turkish Delight. 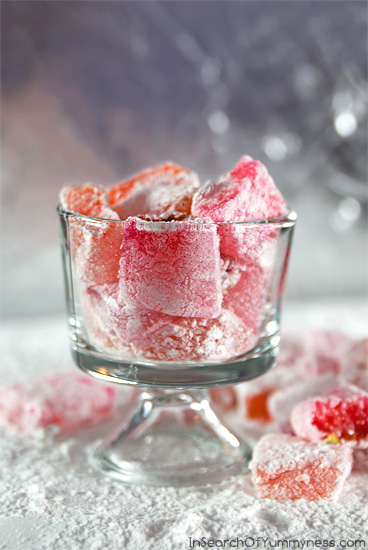 "Now the steps she had heard were those of Edmund; and he came into the room just in time to see Lucy vanishing into the wardrobe.  He at once decided to get into it himself--not because he thought it a particularly good place to hide but because he wanted to go on teasing her about her imaginary country.  He opened the door.  There were the coats hanging up as usual, and a smell of mothballs, and darkness and silence, and no sign of Lucy...he began feeling about for Lucy in the dark.  He had expected to find her in a few seconds and was very surprised when he did not.  He decided to open the door again and let in some light.  But he could not find the door either..."

"He didn't like this at all and began groping wildly in every direction; he even shouted out.  "Lucy!  Lu!  Where are you?  I know you're here." There was no answer and Edmund noticed that his own voice had a curious sound--not the sound you expect in a cupboard but a kind of open-air sound.  He also noticed that he was unexpectedly cold; and then he saw a light... He forgot all about Lucy and went towards the light which he thought was the open door of the wardrobe.  But instead of finding himself stepping out into the spare room he found himself stepping out from the shadow of some thick dark fir trees into an open place in the middle of a wood." 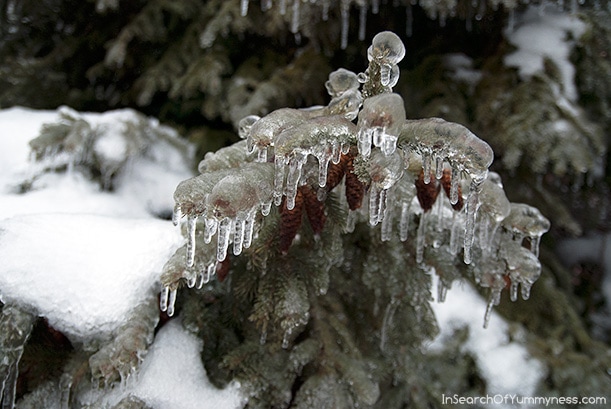 "There was crisp, dry snow under this feet and more snow lying on the branches of the trees. Overhead there was a pale blue sky, the sort of sky one sees on a fine winter day in the morning."

"He now remembered that he had been looking for Lucy and also how unpleasant he had been to her about her "imaginary country" which now turned out not to have been imaginary at all...He looked round him again and decided he did not much like this place, and had almost made up his mind to go home, when he heard, very far off in the wood, a sound of bells." 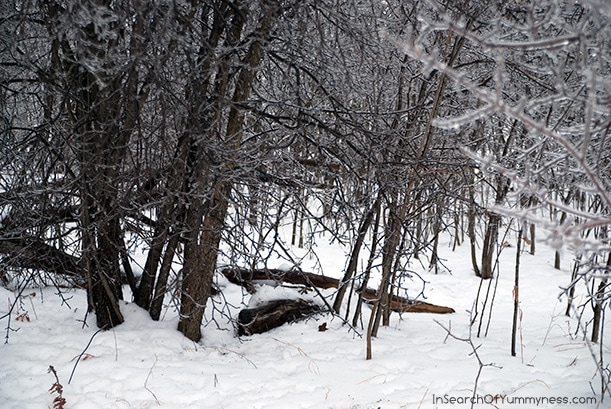 "He listened and the sound came nearer and nearer and at last there swept into sight a sledge drawn by two reindeer... On the sledge, driving the reindeer, sat a fat dwarf who would have been about three feet high if he had been standing... behind him, on a much higher seat in the middle of the sledge sat a very different person - a great lady, taller than any woman that Edmund had ever seen." 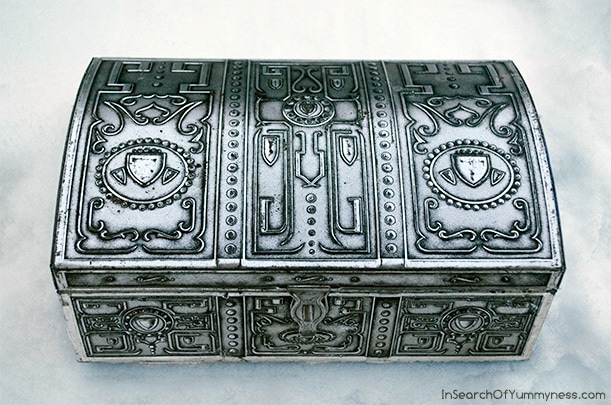 "The Queen let another drop fall from her bottle onto the snow, and instantly there appeared a round box, tied with green silk ribbon, which, when opened, turned out to contain several pounds of the best Turkish Delight. Each piece was sweet and light to the very center and Edmund had never tasted anything more delicious." 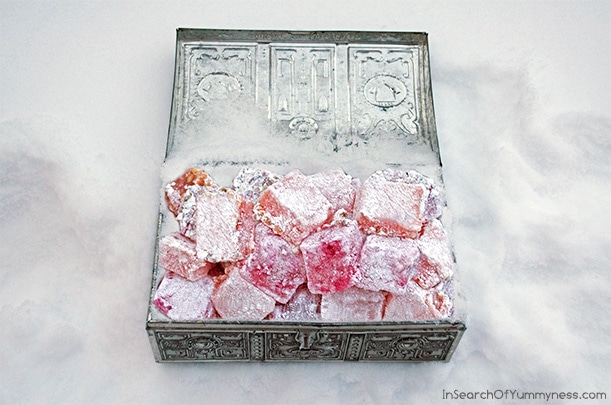 "While he was eating the Queen kept asking him questions. At first Edmund tried to remember that it is rude to speak with one's mouth full, but soon he forgot about this and thought only of trying to shovel down as much Turkish Delight as he could, and the more he ate the more he wanted to eat, and he never asked himself why the Queen should be so inquisitive." 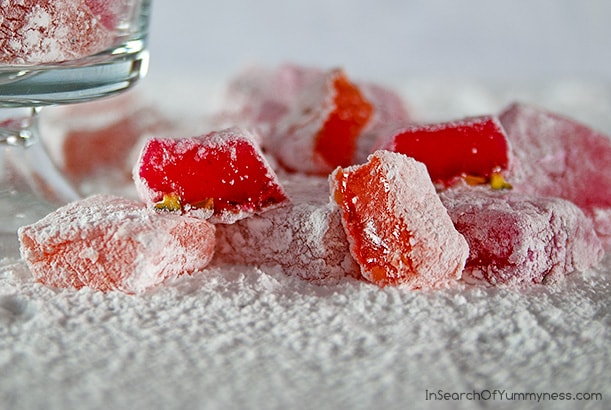 "At last the Turkish Delight was all finished and Edmund was looking very hard at the empty box and wishing that she would ask him whether he would like some more. Probably the Queen knew quite well what he was thinking; for she knew, though Edmund did not, that this was enchanted Turkish Delight and that anyone who had once tasted it would want more and more of it, and would even, if they were allowed, go on eating it till they killed themselves. But she did not offer him any more." 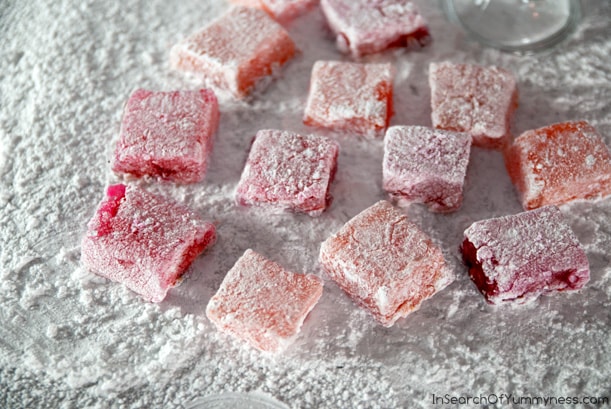 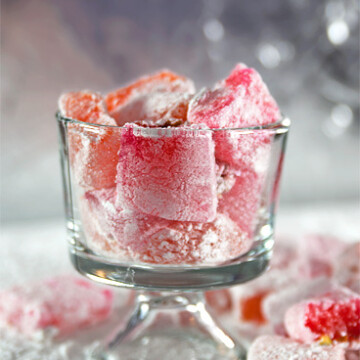 Please note that the nutritional information for this recipe is only an estimate, and has been calculated using a plugin.  Recipe adapted from a Spatula Magazine recipe that is no longer available online.

Disclosure:
This is not a sponsored post, but it does contain Amazon affiliate links.
All unattributed quotations have been borrowed from chapters 3 and 4 of The Lion, The Witch and the Wardrobe by C.S. Lewis.
This recipe has been adapted from Spatula Magazine.