"We are allowed to be bad in the kitchen."

That's what Ricardo Larrivée said to the audience at the Taste Canada food writing awards this week. That's an odd statement from someone who has built a career out of being awesome in the kitchen. It was even stranger considering that he said it to a room full of cookbook writers, editors and culinary professionals.

What he meant, he explained, was that we shouldn't put pressure on ourselves to be great in the kitchen. He gave the example of a single dad, who refused to bake birthday cakes for his son for fear of failing. That's a bit sad, isn't it?

I'm sharing this story because it resonated with me. As a food blogger, sometimes I feel like I can't share a recipe or show you a certain photo unless it's good. I worry that someone will look at my work and think, "what the heck is that?" or "that girl doesn't know what she's doing."

This post fall into that worrisome category. The photos of these blueberry marshmallow bats aren't the best. The recipe didn't turn out the way I had expected. It was destined to be buried in my unpublished files. But, if Ricardo says I can be bad in the kitchen, then I guess it's ok... it was his recipe that I was messing around with anyway 😉

My mom makes wonderful marshmallows. Delicate little fluffy squares that are ever-so-slightly flavoured. These marshmallow bats are not them.

I love to have cute and crafty Halloween decorations at my house, and I thought marshmallow bats would be a fitting treat to feature on my blog. Not that I've ever made anything like this before... but I figured, how hard could it be?

First of all, these marshmallows are a bit too soft and too sticky. I really wanted to put these on sticks, because I thought that would look cute, but it really doesn't work. The marshmallows were so soft that the sticks started poking through the bats heads, resulting in a whole different kind of Halloween look. Sticking them in the freezer helps a bit, but you have to eat them really quickly or they will slide off the stick.

The second issue with these marshmallows it that they kind of taste like blueberry - but not really. I used blueberries and blueberry juice to colour the marshmallows because, in my mind, all Halloween bats are purple. The only way I could think of to get purple marshmallows without using food colouring was to use blueberries. The resulting colour wasn't bad, but the flavour of the blueberries was lost in all that sugar.

The third problem with these treats is that they don't really look like bats... The cookie cutter I used was perfect, but I ruined them with my drawing skills. I didn't realize until I was shooting these that if you draw the lines of the wings too straight, they look more like crabs than bats.

I made purple crabs. (Once you see it, you can't un-see it, right?)

The marshmallows also dried out under my photography lamps, and ended up looking old and wrinkly.

On the bright side, the marshmallows are perfectly edible. Sure, they weren't what I thought they would be, but they're still good. They even taste good in hot chocolate, miraculously.

Of course, they do melt pretty quickly... just something to keep in mind.

I used some nifty Wilton products to decorate my bats, but you can just use royal icing if you prefer. Personally, I enjoyed using the Wilton Candy Eyeballs

and the Wilton Halloween Food Writer.

Is there anything that company can't make? 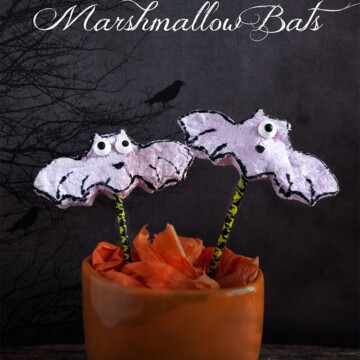 No ratings yet
Created By: Shareba
Prevent your screen from going dark
PRINT RECIPE SAVE RECIPESaved!
SERVINGS 14 bats

To Decorate Your Bats:

*EDIT: Chef Eyal Liebman says the marshmallows will turn out better if you don’t boil the gelatin. Try adding it after the syrup comes to 118c. Adapted from Ricardo's Super Easy Strawberry Marshmallows.