These crispy potstickers are easy to make and have a tasty chicken, mushroom and cabbage filling.

Let me begin by saying, if you have never wrapped a dumpling before, don't stress about how your dumplings look.

Of course fancy potstickers with lots of pleats are very pretty, but they require some technique and more than a little practice.

While there are quite a few ingredients in the filling, it's actually very easy to make

First, you need to sprinkle the Napa cabbage with salt and set it aside for about 20 minutes. This will pull the excess water from the cabbage, which you want to do before adding it to the filling.

Once you squeeze the excess moisture from the cabbage, you'll add it to a bowl with the rest of the ingredients.

I chose to use cremini mushrooms in this recipe because I like the flavour, but you could use white button mushrooms or shiitake mushrooms instead.

Or, if you're not a mushroom fan, you can omit them all together and still have a tasty dumpling.

I also used ground chicken in my filling, but of course, you could use ground pork here instead. If you do use pork, you will probably want to omit the oil that I added to the mixture, as it may become too greasy.

Once you've mixed the filling, it helps to set the bowl in the fridge for at least 30 minutes to chill. This makes it easier to handle when filling your dumpling wrappers.

The chilling process can also help to keep the fat cold until it's cooked, which gives you a juicer dumpling.

Once your mixture is chilled, you can start wrapping!

Set up a wrapping station on a clean work surface in your kitchen.

Keep your dumpling wrappers nearby along with the large mixing bowl of filling. You'll want to work quickly so that your wrappers don't dry out!

I found this part really frustrating at first because I was being a perfectionist. If I can give you any advice, it would be to just relax and have fun with it.

Who cares what it looks like? No one is judging you on your folding skills.

When is comes to wrapping your dumplings, the easiest fold you can do is a half-moon shape.

You literally just fold the round wrapper in half and press down the edges. It will look like a pierogi, and it will taste just fine.

If you're short on time or patience, this is the fold for you.

If you want to get a bit fancier, you can try adding a few pleats to your fold.

I followed a video on YouTube, and honestly it's the only reason I managed to make anything half-decent in the end. I could NOT get my head around the pleating until I watched Magic Ingredient's demonstration.

It's not in English, but I slowed the video down and was able to follow what she was doing.

If you're feeling really ambitious, or you already know how to wrap dumplings, then go all in and add lots of pleats!

My mom made the dumpling below, and it was so damn cute... yes, I was jealous of her skills. Have I mentioned that she's never done this before?

She watched Maggie from Omnivore's Cookbook wrap dumplings and picked up the technique very quickly.

As you wrap your dumplings, you'll want to put them in a single layer on a baking sheet lined with parchment paper. This will prevent them from sticking to the surface.

You'll also want to cover the shaped dumplings with a damp cloth or a piece of plastic wrap so they don't dry out.

It will take you a little while to wrap 30 dumplings on your own, and if you leave the wrapped ones open they will dry out significantly.

🥶 How to Freeze the Dumplings

If you're not going to cook the dumplings right away, you can freeze the raw dumplings for later.

Just put the whole tray in the freezer and wait until the dumplings are frozen solid. Then you can move them into a zip-top bag or a freezer-safe container and leave them in the freezer for up to 3 months.

When it comes to actually cooking the dumplings, there are a few different ways to do it.

Some people prefer to boil the dumplings first, and then fry them. I didn't want to do that though because I'm lazy...

I opted for the method that requires you to add the dumplings to hot oil, then steam them in the same pan, and then crisp them up again.

If you've never cooked dumplings like this before, it probably sounds counterintuitive to make them crispy and then add water, but trust me this works!

You'll get a crispy bottom on your dumplings every time.

It will take a little while to fry all of the dumplings that you wrapped. Just take your time and carefully fry each batch in a large pan until the bottoms are golden brown.

I find that using a nonstick pan makes the frying process a bit easier.

I put my completed dumplings in a single layer on another baking sheet so that they don't stick together.

Avoid the temptation to hold the cooked dumplings in the oven while you fry the rest, though! I tried this, and the potstickers dried out horribly. You don't want to ruin all of your hard work!

Cooked pan-fried dumplings can stay in the fridge for a couple of days, but you'll need to re-fry them, or they won't be crispy.

TIP: If you run out of wrappers, the leftover filling can be rolled into meatballs and fried. These make tasty little treats when dipped into sweet chilli sauce.

A Note About Cooking Chicken: I always use a food thermometer when I'm cooking chicken, so I can avoid giving myself or my family salmonella poisoning.

Health Canada recommends cooking ground chicken to a temperature of 165°F or 74°C. Once you've hit that, you know your chicken is fully cooked and safe to eat.

Check the dumplings as soon as you take them out of the skillet, or they will cool down and you won't get an accurate reading.

Serve your cooked dumplings warm, with a dipping sauce of your choice.

I went with a classic soy sauce and chilli mixture (with some toasted sesame seeds for fun), but you could do soy sauce and Chinese black vinegar (another classic combo), or just plain soy sauce, or just eat them plain.

I garnished my plates with chopped green onion, but that's totally optional. If you don't like raw green onions, don't use them!

Want more dumplings in your life? Check out my recipe for fried shrimp wontons with mushrooms. 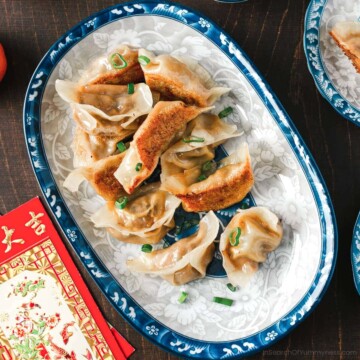 Serving Suggestions: These pan-fried dumplings are traditionally served with soy sauce mixed with chili oil, or soy sauce and Chinese black vinegar. But you can serve them plain, or just with regular soy sauce if you prefer. Freezing Dumplings: Uncooked dumplings can be placed in a single layer on a tray lined with parchment paper, and frozen for later. Once the dumplings are frozen, you can transfer them to a zip-top bag or freezer-safe container, and use within 2 months. There is no need to defrost the dumplings before cooking.  Cooked dumplings can be stored in the fridge for up to 2 days. Reheat in a frying pan otherwise they will be a bit soggy.  Safety: Be sure to cook your chicken to 165°F (74°C). Be careful when adding water to the oil in the pan, as it may splatter. Also, you may need less than ¼ cup depending on the size of your pan. Add just enough water to cover the bottom of the pan.