Crispy fried shrimp wontons are easier to make than you might think! Read on for step-by-step instructions.

I have many friends who celebrate this special holiday, so I wanted to share a recipe to mark the occasion for them. Today I’m sharing my version of fried shrimp wontons with mushrooms.

Wontons are a type of Chinese dumpling, which consists of a thin dough (called wonton skins) filled with minced meat, seafood or vegetables. They can be prepared in several ways, including steamed, boiled or fried. You may be familiar with wonton soup, for example.

When fried, these crispy dumplings make are a wonderful appetizer that pairs well with various dipping sauces. I’ll talk more about the sauces in a minute.

My mom used to make fried wontons as a treat for my brother and me when we were kids, and now I crave them when I want comfort food. My favourite filling is shrimp with a touch of ginger because that’s what I grew up with.

(If you’re not sure what king oyster mushrooms are, check out this page from Mushrooms Canada. They have information about all of the different kinds of mushrooms that are available in Canada.)

You can find wonton skins in more large grocery stores – usually in the refrigerated section. The best wontons skins you can get are the frozen ones from Asian speciality markets, but remember that these need to be defrosted in the fridge overnight, or for about an hour on your counter, before you can use them.

Wrapping the wontons might seem complicated at first, but the task becomes easier with practice. The key is to not add too much filling to each wrapper. Too much filling makes the wontons difficult to fold, and sometimes they will burst during cooking too.

You should also make each wonton one at a time, and leave the rest of the skins covered with a slightly damp towel to prevent them from drying out.

Your wontons will taste delicious no matter what shape they are, but one of the easiest shapes to make is a triangle.

To start, wet the edges of the wrapper with some water to make it tacky, then use your fingers to press along the edges to tightly seal the wonton. Once you’ve removed all of the air from the dumpling and sealed it shut, you can move on to the next one.

I personally like to make a pouch shape for my fried shrimp wontons. Start by making the basic triangle above, then apply some water to the bottom points. Fold in each point towards the middle of the triangle (like doors) to make the pouch (shown below).

Alternatively, you can make a triangle, then make push down between the two bottom points with your finger. This makes a little dent in the dumpling. Then pull up the two bottom corners and stick them together to make a flower bud shape (which looks like Italian tortellini). That’s my mom’s signature wonton shape, which you can see floating in a pot in the photo below.

As you fold each wonton, put them on a plate or baking tray (lined with parchment). Your wontons might be a bit wet if you were heavy-handed with the water, so if needed let them dry out a bit. Remember that water and hot oil don’t mix! The drier the wontons are, the less likely you are to get burned. You may need to flip them over to dry out both sides of the wontons before you fry them.

I like to use a deep pot to fry my wontons, but if you have a deep-fryer that would work too. These only take a minute or two to cook though, so be careful not to burn them!

Once the wontons are golden brown all over, remove them from the hot oil with a slotted spoon or a spider strainer

. Then place the cooked wontons on a wire rack with a tray underneath to catch any excess oil (they will stay crispy), or on a plate lined with paper towel (the bottoms will get a bit soft).

If you keep your oil hot enough (around 375°F) your wontons shouldn’t be too greasy. That being said, if you find that your wontons are browning really quickly, but your filling isn’t cooking through, you will need to lower your temperature a bit so the wontons can spend more time in the oil.

These fried shrimp wontons are nice on their own, but they are fabulous with a good dipping sauce. You can use a ready-to-serve sweet chilli sauce or try plum sauce if you’re serving these to children.

While not traditional, Sriracha mayonnaise pairs really well with these wontons, and you can easily whip that up by combining a few spoonfuls of mayonnaise with a squirt of Sriracha Hot Chili Sauce.

My favourite sauce is a spicy soy-based dipping sauce, which I’ve included in the recipe below. I like the spicy and salty kick that it gives to these fried shrimp wontons. 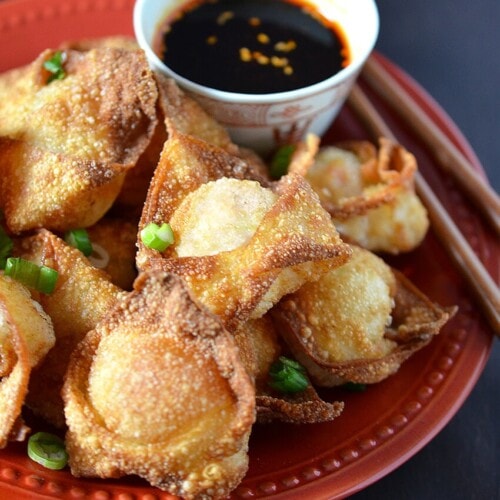 To Make the Wontons

To Make the Dipping Sauce:

Tip: If your wontons have become wet because you used too much water to seal them, allow them to dry out before you fry them. You may need to flip them over to dry both sides.

Calories: 37kcalCarbohydrates: 4gProtein: 3gCholesterol: 29mgSodium: 223mgPotassium: 36mgVitamin A: 5IUVitamin C: 0.7mgCalcium: 21mgIron: 0.6mg
Have you made this recipe?Leave a review in the comments below!