Taro root (also called Dasheen) is a starchy vegetable (like a potato) that is native to tropical areas. It is often used in Caribbean, Polynesian and African cuisine.

I’m Trinidadian, so I’ve grown up eating dasheen, but I never really liked it as a child. Now, as an adult, I can appreciate its complex flavour. My favourite way to prepare this purple-specked root vegetable is to just boil it and eat it with butter.

What is Taro Root?

Taro root is the tuber of the taro plant. It has an inedible papery/fibrous skin and sweet white flesh. The leaves of the taro plant are also edible, and are used to make the popular Caribbean dish called callaloo.

Taro (the tuber and the leaves) should never be eaten raw, as many varieties are toxic until you cook them. When cooked, the flesh takes on a potato-like texture, with a slightly nutty and earthy flavour.

Where to buy Taro Root?

The variety of taro called Dasheen is grown in the United States, and is generally easy to find at most supermarkets and speciality food stores. Since these tubers can grow to be quite large (up to a foot in length, and several inches in girth) you can sometimes find it sold in large pieces. Choose roots that are firm, smooth, and heavy for their size. Avoid any rots with mould, soggy spots or damaged areas.

How to use Taro Root?

You can cook taro root much like how you would cook a potato. They can be boiled and made into mash (although be warned, it will be grey in colour!), or served in slices with a little bit of salt and butter. You can also try baking thick slices in the oven, or frying thin slices into chips. Thinly sliced fried strips can be used as a crunchy garnish on soup or salads.

You should wear gloves when handling raw taro, as it can irritate your skin.

How to store Taro Root?

Taro roots should be kept in a dark, cool place, with good ventilation. Do not store in plastic, or in the fridge. Taro should be used as soon as possible, because they soften and spoil quickly.

What to cook with Taro Root? 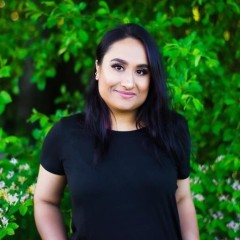 Welcome to my blog!

Welcome to In Search Of Yummy-ness, a food-centric lifestyle blog that explores international recipes, suburban gardening, and seasonal living.