These sweet pumpkin waffles with a hint of pumpkin spice, are a decadent treat when served with pecan syrup! 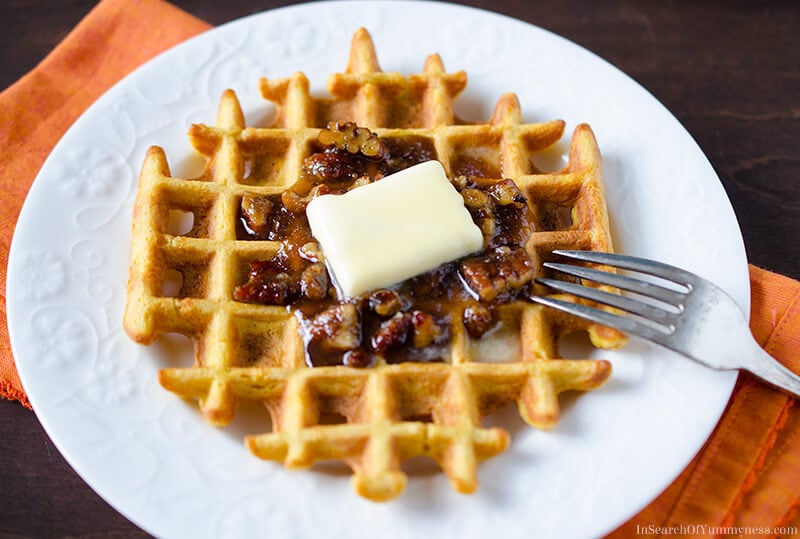 I've been wanting to create this recipe ever since Ward ordered pumpkin pancakes on season two of Agents of S.H.I.E.L.D. Do you watch that show? It took me a while to really get into it, but now I'm a devoted fan. I even had my photo taken with Ming-Na Wen (Agent May) at this year's Fan Expo in Toronto. She is hilarious in real life - not at all like her character on the show. Did you know she's the voice of Mulan too? Clearly, she is awesome at playing strong female characters!

I'm a big fan of Chloe Bennet now too, which is funny because I didn't really like her in the first half of season one. But her character is so much more interesting now - who knew that she'd be so integral to the story?? If you're a fan of the show who isn't caught up with the recent season, you'll be upset with me if I say anything more than that. So, on to the recipe! 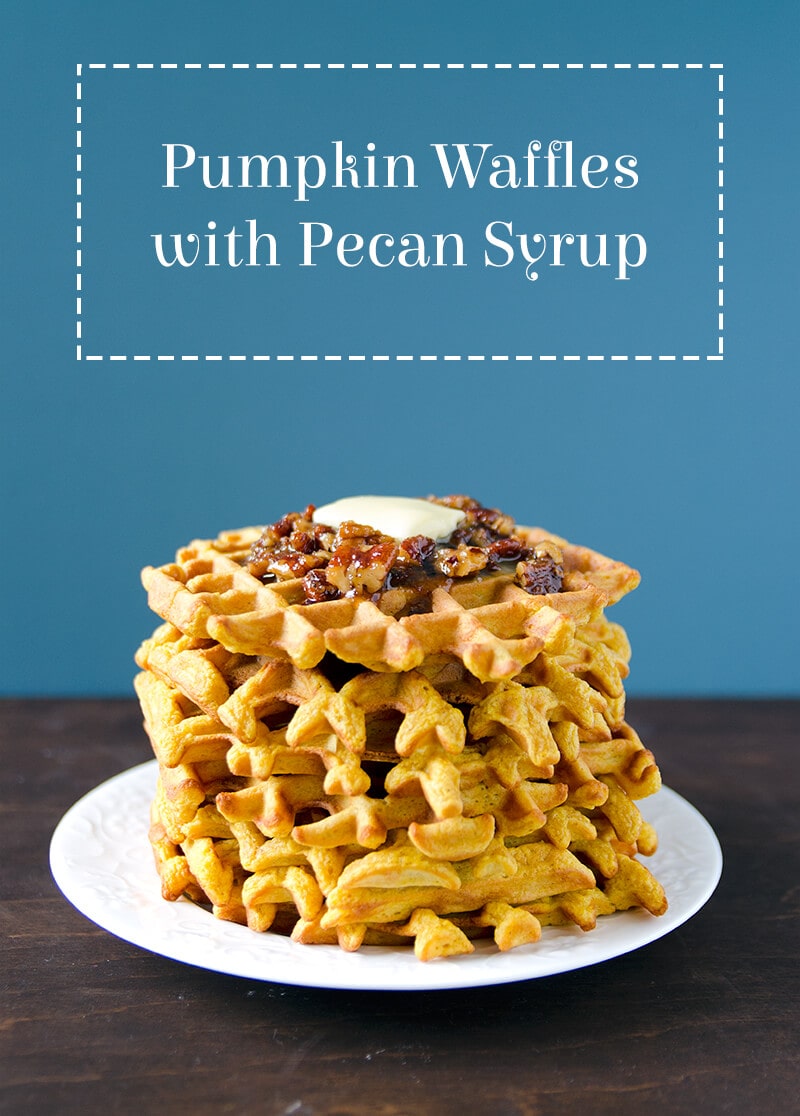 Pumpkin pancakes sounded good, but I thought pumpkin waffles would be even better! I think Ward would eat them... anyhow, you don't need to be a fan of the TV show to appreciate these waffles.

It took weeks of testing to get them right, but I'm so happy with how the final recipe turned out. Although, I'm pretty sure that I gained 5 lbs from eating so many of them as we were testing the recipe... 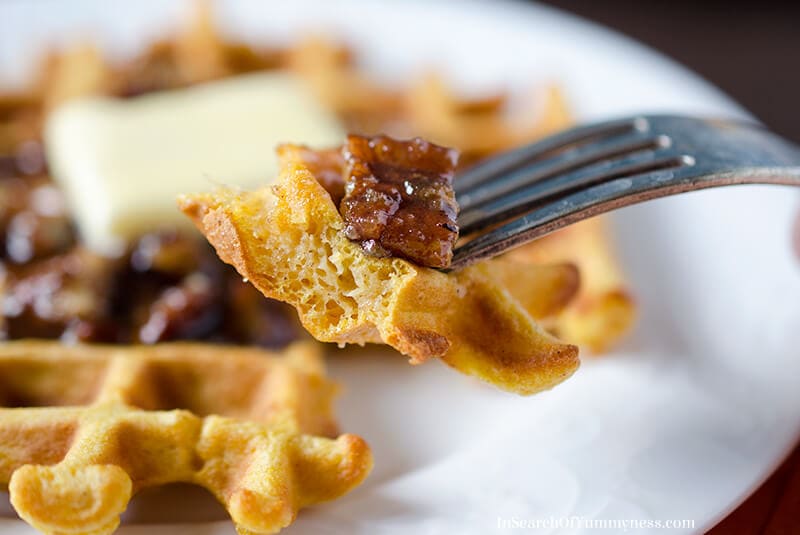 So, technically, I could call these pumpkin "spice" waffles because there is pumpkin spice in it. But I really didn't want to do that for two reasons.

The first is that people seem to be off pumpkin spice as a flavour, which is unfortunate because not all pumpkin spice recipes taste like eating a candle from Bath and Body Works.

The second reason is that the spice is pretty subtle in these waffles. I wanted them to have pumpkin flavour, but when I added too much pumpkin or pumpkin spice the waffles lost their sweetness. 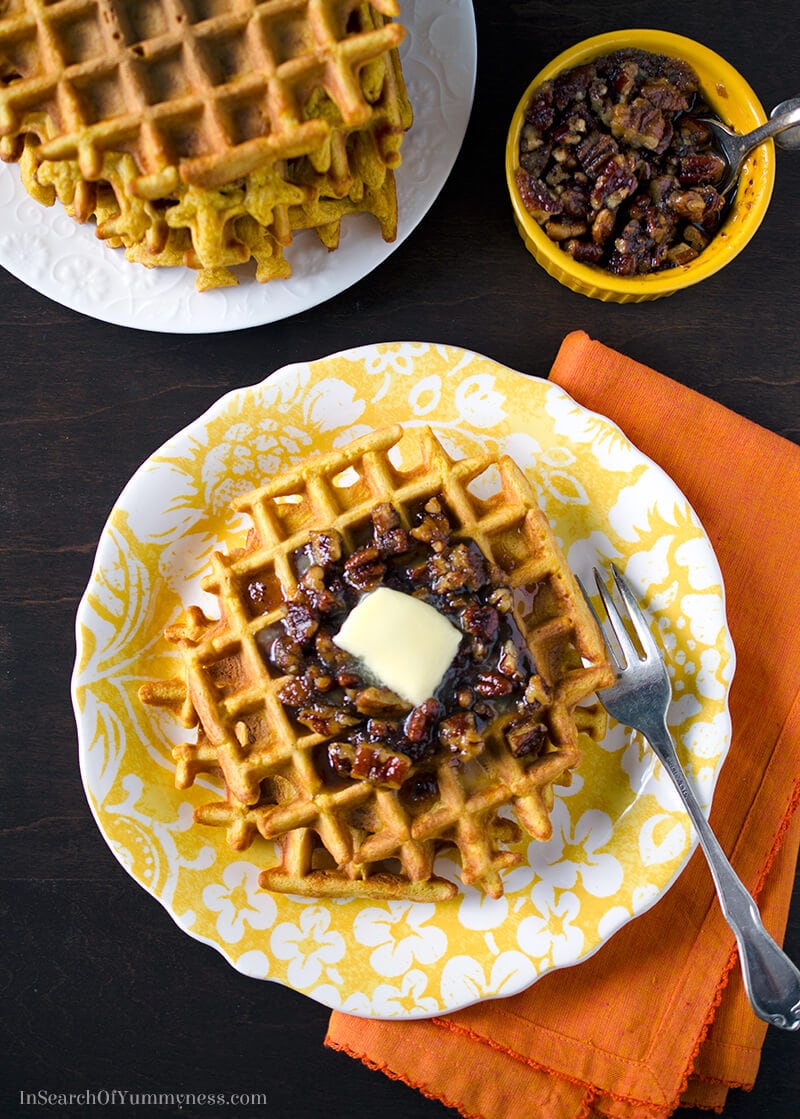 So while these pumpkin waffles taste distinctly different from regular waffles, they aren't strongly flavoured. I think most kids (and other picky eaters) would eat these without complaint.

On the other hand, the pecan syrup is quite strongly flavoured. The toasted pecans and maple syrup add deep, rich, toasty flavour to the waffles, and it's very sweet. Like, candy sweet. This isn't something that you would eat every day. But oh my gosh is it ever good!

Oh, I should add that I made these waffles on my George Foreman grill, not a proper waffle iron. My grill is super old, but it came with waffle iron plates so I've never bothered to buy a "real" waffle iron. So as a result, your waffles might look a bit different from mine. Just a heads up 🙂 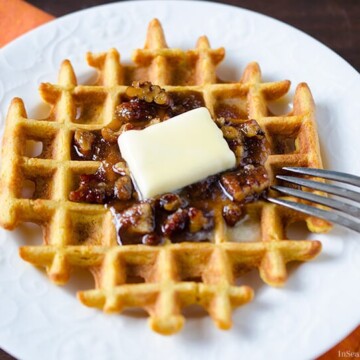 For the Pecan Syrup:

TIP: If you're waffles are coming out soggy or rubbery, it's because the temperature is too low. Waffles need high heat to get crispy! Adapted from Martha Stewart's waffle recipe.