This post is sponsored by The National Watermelon Promotion Board.

We’re having one of the hottest summers ever here in Ontario, and the only way I’ve been able to avoid wicked dehydration headaches is by drinking a ton of water (duh), and eating as much watermelon as possible.

Did you know that Watermelon is 92% water? This makes it an excellent hydrator. It’s also an excellent source citrulline, an important amino acid. Apparently, this makes watermelon a great choice for post-work recovery. Walking in this heat sure feels like a workout, so I’m eating all of the watermelon that I can get my hands on.

Plain watermelon is always a tasty option, but I like to play around with savoury flavours too! I’ve been sprinkling on pinches of salt and splashing Balsamic vinegar on top of cut up chunks. Sometimes I get adventurous and sprinkle on my mom’s homemade chilli flakes, which are about a thousand times hotter than what you can buy at the store.

I felt like I needed a step-up from my chilli-salt-Balsamic combo after a while, so I started playing around with different vinegars, peppers and sauces. That’s how I came up with my Spicy Marinated Watermelon Bites!

By the way, if you’re looking for more watermelon recipes, be sure to check out Watermelon.org. You’ll find all kinds of recipes there, including watermelon jerky, pickles and salad!

Ok, before I talk about the recipe, I want to share some tips on how to pick a perfectly ripe watermelon since you’ll need one to make the bites.

How to Select a Perfect Watermelon:

Ok, let’s talk about the recipe.

The key to making these Spicy Marinated Watermelon Bites is the strong vinegar-based marinade. It’s pungent, so you might not want to taste a big spoonful when you’re putting this recipe together!

I also don’t recommend leaving the watermelon to marinate overnight. I tried that, and the result was inedible. The watermelon takes on too much of the vinegar and cayenne, making it extremely sour and way too hot. Don’t do it!

Aside from the marinade, the only other components are tiny bocconcini pearls, and fresh garlic-basil pesto. Of course you can use the store-bought stuff if you want to, but it’s hard to beat the flavour of fresh homemade pesto.

Not all pesto has garlic in it, apparently, and I’m not sure that this will be as yummy without the garlic… but then I really love garlic, so maybe you’d be fine.

This flavour combination might seem a little weird at first, but it’s actually delicious! Watermelon can often be used in place of tomatoes, so think of this as a type of Caprese salad, just with watermelon and pesto instead of tomato and basil. 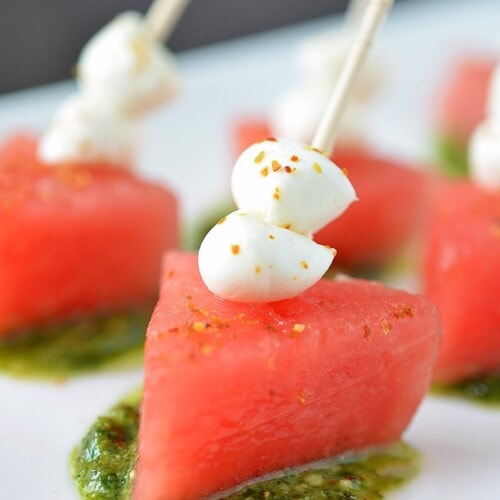 – Don’t worry if it doesn’t look like enough marinade at first, the watermelon will release water as it marinates and everything will be evenly coated in the end.
– These bites cannot be made in advance

Have you made this recipe?Leave a review in the comments below!

Disclosure:
This post is sponsored by The National Watermelon Promotion Board.
The recipe and all images in this blog post belong to me. The watermelon facts were provided for me.