Home / Food News / My Experience at the Weber Grill Academy 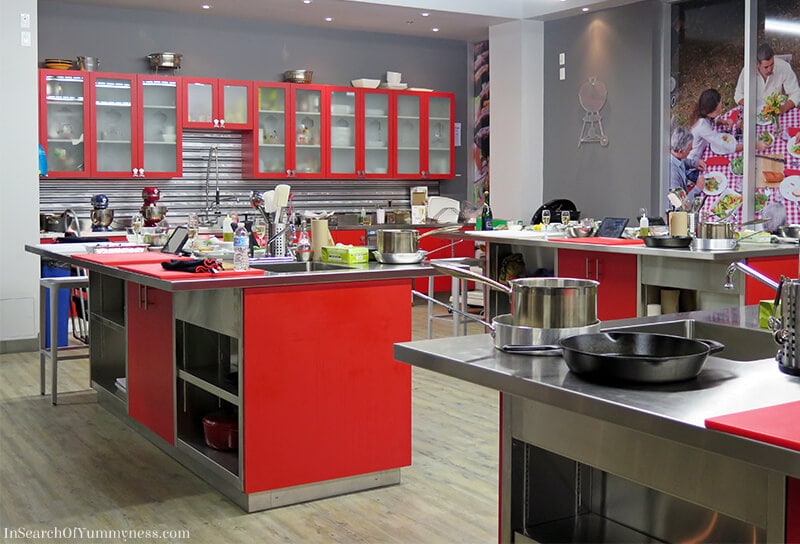 If you’re looking for a way to escape the polar vortex, you might want to consider taking a grilling class. You get to enjoy the warmth, smells and tastes of a summer barbecue, without having to do any cleaning or prep work!

I visited the Weber Grilling Academy last week, and had the chance to take part in a special class for bloggers. At first I was afraid that I would be completely out of my element, because I’m not great at grilling. I was pleasantly surprised to discover that the learning environment at Weber is very comfortable, which helped me relax.

We started the evening with a few treats that had been grilled before we arrived. My favourite was a smoked brie with a spicy blueberry sauce. I NEED to try making this at home, it was so flipping good!

You know that’s not the word I was going to write… but I’m not sure if you’d be ok with me swearing. You can be creative and swap the word out with something else 🙂 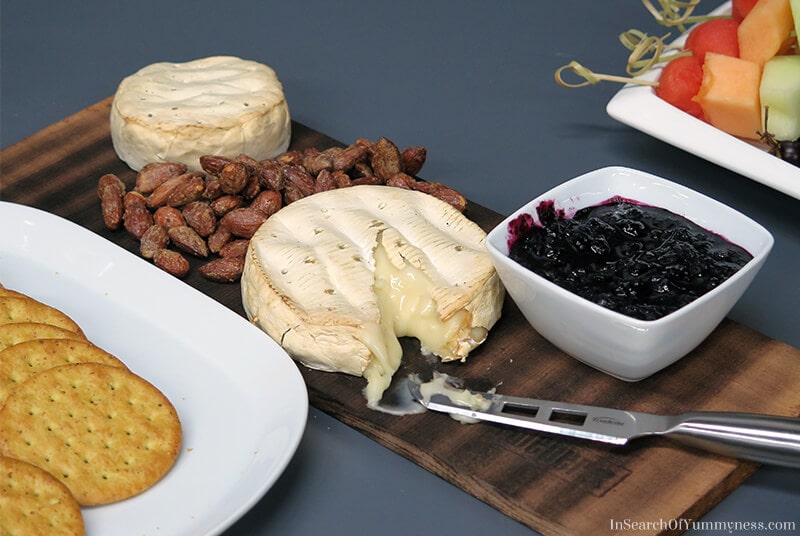 Once everyone arrived, we were divided into groups of four. My team consisted of Annie (Chu On This), Gav (Grill Interrupted) and Howard (father of The Piquey Eater). As we all gathered around our work station, we were greeted by Chef Michael P. Clive. He told us that we would be cooking not one, not two, but FIVE different dishes during the class, using both the gas and charcoal grills.

I wondered how we would ever get that much cooking done in less than three hours. Especially since some of the recipes required more than 30 minutes of cooking time.

Before we began cooking, Chef Clive told us that all of the recipes were pre-loaded on to the iPads on our stations. You can’t see the recipe screen on the iPad in the photo below, because Howard and I couldn’t find them at first 😛 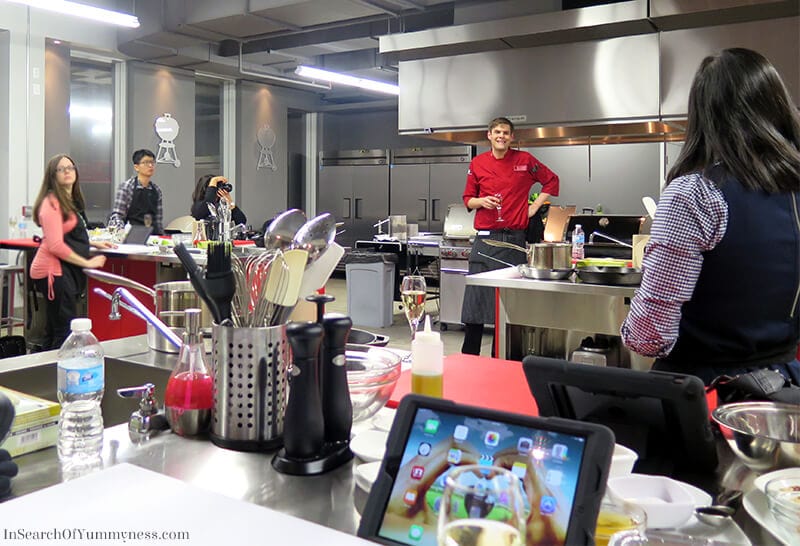 The first recipe that we began working on was Smoked Chicken Drumettes with Orange-Honey Glaze. The wings and drumettes were already prepped in a tray for us, so all we had to do was season them with salt and pepper, and then send them off to get smoked. After 30 minutes of grilling they were doused in the glaze and served. Yum! 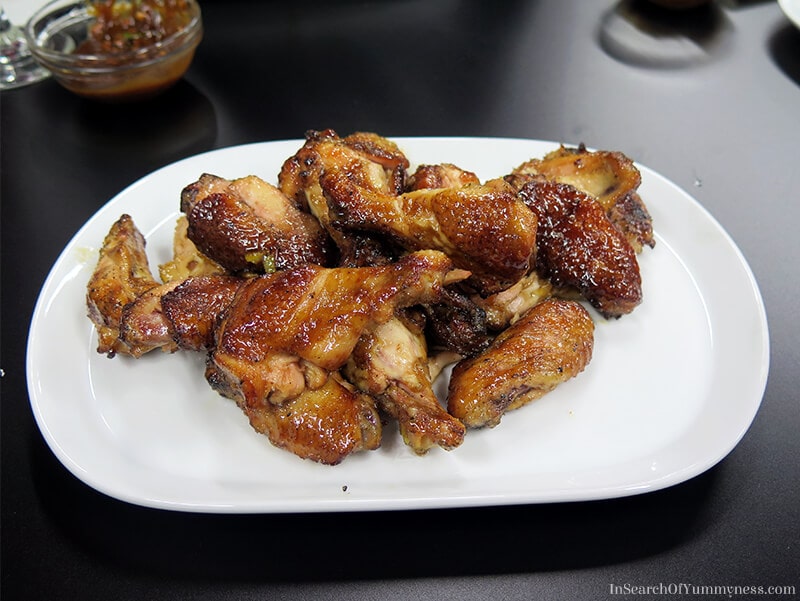 Next up was the Grilled Pineapple Upside-Down Cake. This recipe had several parts to it, so we split up the work. Gav grilled the pineapple slices, while Howard mixed up the cake batter. Annie and I worked on the brown sugar glaze for the cake. Well, Annie worked on it… I took photos. Someone had to!

Chef Clive made sure to visit everyone to make sure that we were on the right track. He was super friendly, and provided lots of help without making anyone feel bad or conscious.

Once all of the parts were ready, we put everything into a cast iron skillet and stuck it in the gas grill. After almost an hour of cooking, we had a perfect old-school dessert.

I still hadn’t built up the nerve to physically grill anything, but I was having a great time. I felt like I was on Top Chef, minus the stress and drama!

The next item on the menu was a Cedar-Planked Salmon. Chef Clive made us promise not to ever light a charcoal grill with starter/lighting fluid. Apparently it changes the taste of your food. Then he told us to burn the cedar plank so that it would impart more flavour to the salmon.

Finally! Something I can do!! Burning things is one of my special talents.

The Weber Grill Academy sous-chef, Damien, prepared the coals for our charcoal grill. I think he said something about indirect heat, but I was too busy staring at the sparks that were flying.

After Annie and I burnt the plank, we put the salmon on it and placed it in the grill. It took about 20 minutes for the fish to cook through, and then the guys glazed it with the honey-lime dressing. I was surprised at how moist the salmon was! I thought that the high heat of the grill might dry it out, but nope! 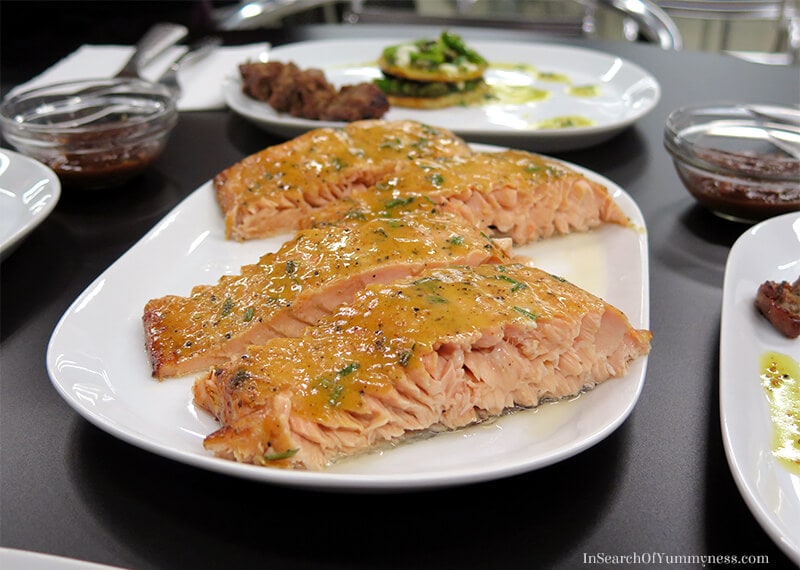 By this point in the night we had found our groove. Everyone was busy working on something, and there was a lot of friendly chatter in the room. I love how cooking can bring people together! When you’re all working towards a common (and hopefully delicious) goal, you really get to see the best in people.

My favourite recipe that we worked on was the Asparagus and Potato Napoleons. I actually grilled the veggies for this dish.

That’s right, it was MY TIME TO SHINE!!

We don’t need to talk about how many of those potato slices and asparagus spears I started with, and how many ended up on our plates. Let’s just say that some of them took a journey to Mordor, and fell into the fiery depths of Mount Doom…

The veggies that did survive my cooking skills turned out really nice. Gav and I worked together to build and plate the Napoleons – aren’t they pretty? 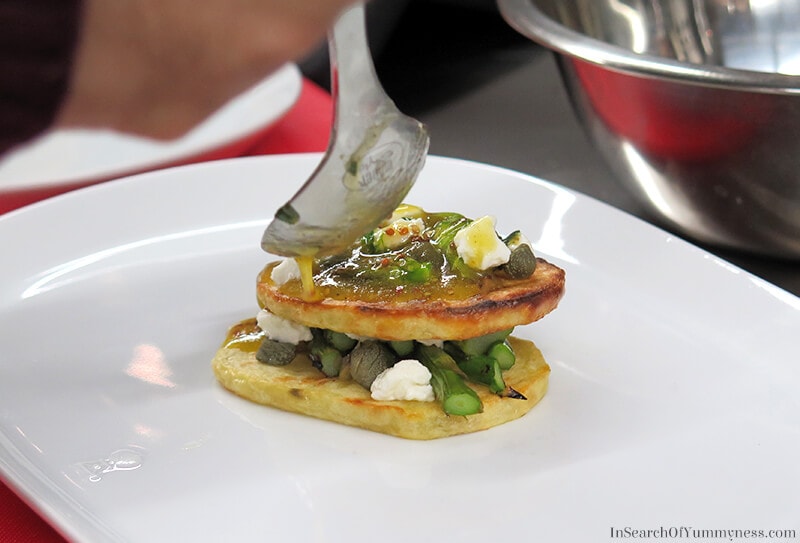 After two solid hours of cooking, we were rewarded with plates of delicious food! Oh, those brown squiggly things on the plate are Beef Satay with a spicy Peanut Sauce. I had absolutely no part in that dish, as I was busy watching my veggies cook. I loved that we were able to enjoy a sit-down meal with our teammates. It gave us the opportunity to chat, and of course devour the delicious meal we had made together. 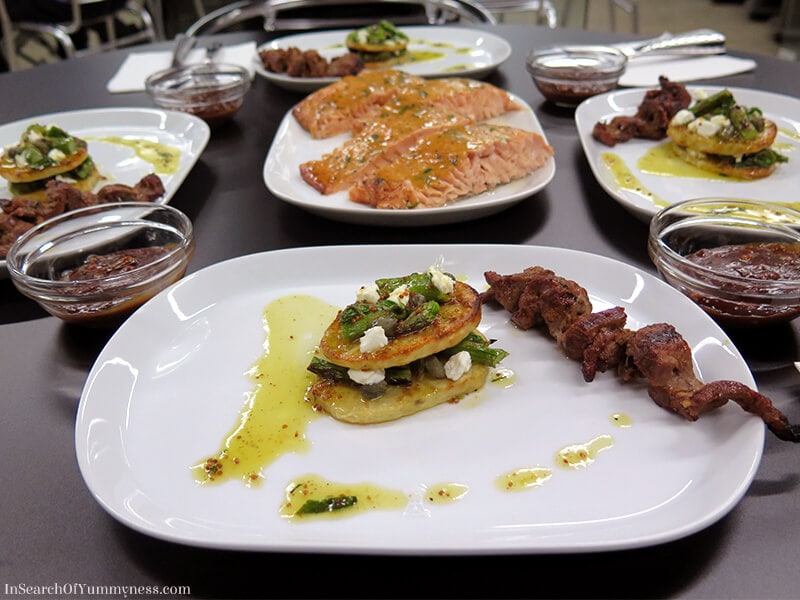 The Grill Academy offers regularly scheduled public grilling classes, as well as private parties and corporate events. The classes are held year-round, are open to the public, and are always hands-on.

In each class, you get three hours of instruction from Grill Specialist, Chef Michael P. Clive. When you’re done, you get to eat your creation (and can take home your leftovers—if there are any).

To learn more about the Weber Grill Academy, and the classes that they offer, visit WeberGrillAcademy.ca.

Disclosure:
I did not pay to attend the special bloggers class, as it was an invitation-only event.
This is not a sponsored post. Weber has not paid me to write this post.
However, I was given a Q 1200 grill which I may review sometime if I like the product.