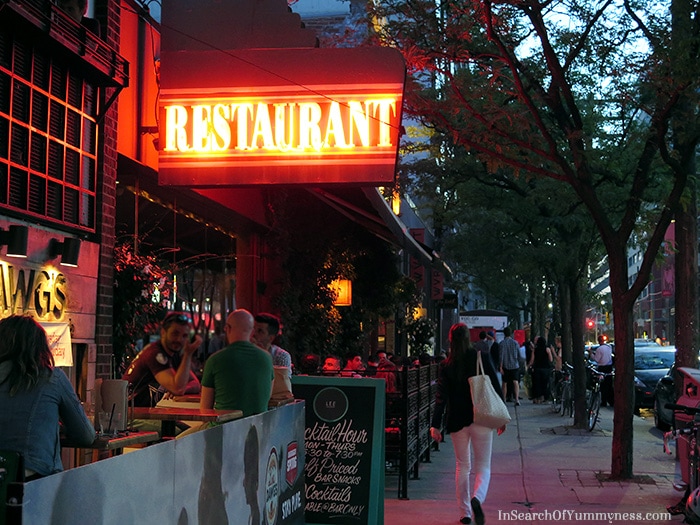 When we arrived, the server explained to us that they serve all their dishes family-style, which basically means your food arrives on large plates and are meant for sharing. She said that we could either order individual portions for Summerlicious, or just order all of the dishes as share-plates.

We were also able to add-on dishes from a small menu of their best-selling items, which I thought was nice. This was such a stark contrast to my Summerlicious meal at the Old Mill, where they didn't even offer tea or coffee, and then fussed when we requested tea because it would cost more than the flat Summerlicious fee. Smart restaurants know that you'll end up spending more money if they allow you to order on top of the prix-fixe menu.

We ordered every dish from the Summerlicious menu as share plates, since there were three of us and we wanted to try everything. That's a lot of food, so I'm only showing photos of my favourites in this post.

We started with a pitcher of Sangria (shown below). This was easily the best Sangria I have ever had! I wish I remember what was in it... I vaguely remember something about wine, Prosecco for bubbles, and lots of fruit. There were blueberries, dragon fruit, strawberries, blackberries, mango and I think currents in there too. All of the cocktails are really expensive at Lee ($16 and up), but we felt that the Sangria was worth the price. 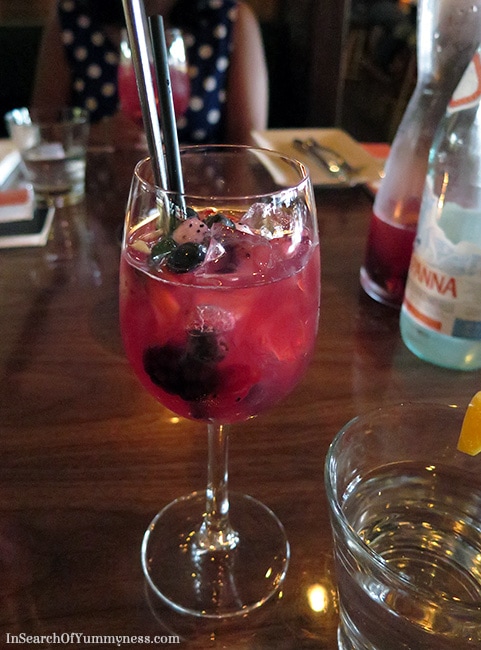 We also ordered Susur's Signature Singaporean-style Slaw. I've heard people talk about this dish before, but I could never figure out what all the fuss was about. Now I know. This dish has over 19 ingredients, which you would think would result in an overly complex dish, but it's actually surprisingly light. There are so many great flavours and textures in this dish, that every mouthful tastes just a little bit different. Apparently the chef adds a new ingredient every year as a Chinese New Year tradition. If you're intrigued by this dish, you should check out this video where Chef Lee shows Steven and Chris how to make it. 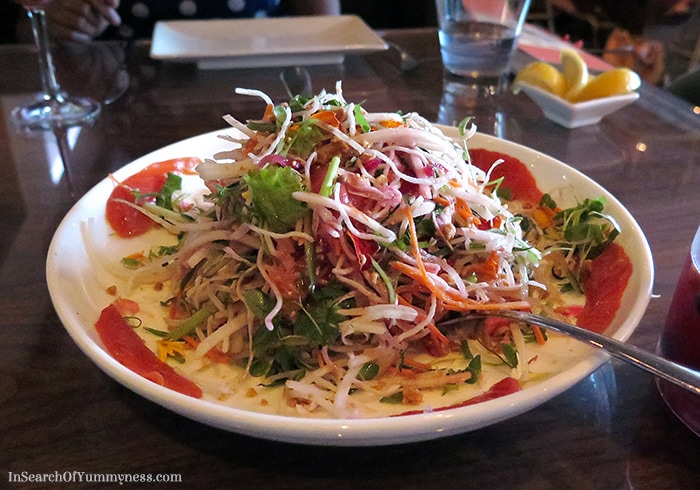 The photo below is the Crispy Calamari with Cod Cake appetizer. This is served with Sriracha mayo, charred tomato salsa and spiced salami chips. The seafood on this plate were outstanding! The calamari was crisp, the cod cake was flavourful, and neither item was salty or greasy. The tomato salsa really brightened the flavours on this plate, while the mayo added richness. I couldn't eat much of the mayo though, because of my food sensitivities. 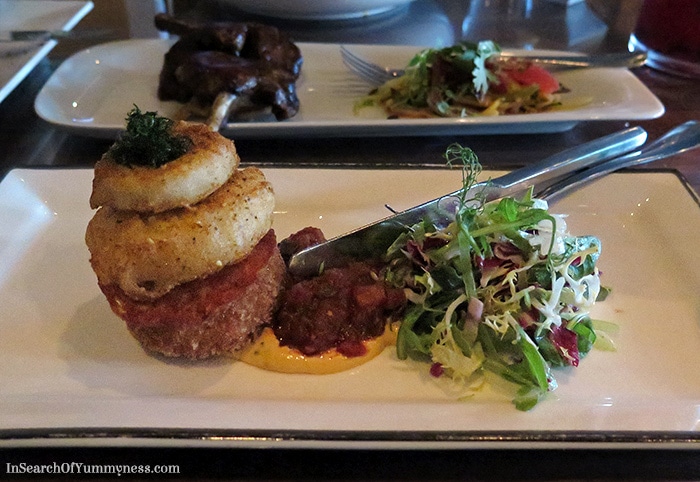 We were supposed to get Thai Fried Chicken as one of our appetizers, but we were given Jerk chicken instead (not pictured). It was tasty, but I think I would have rather eaten fried chicken instead. The final appetizer dish was the vegetarian Watermelon & Feta Cheese Salad (shown above).  This dish combined jalapeno chili, black olives, black pepper balsamic soy vinaigrette and fresh mint. This dish was really refreshing, but also very surpising. The olives added a briny, salty flavour to the sweet watermelon, and I thought that was an interesting pairing. The micro-greens were a bit peppery too, making this a very savoury dish. 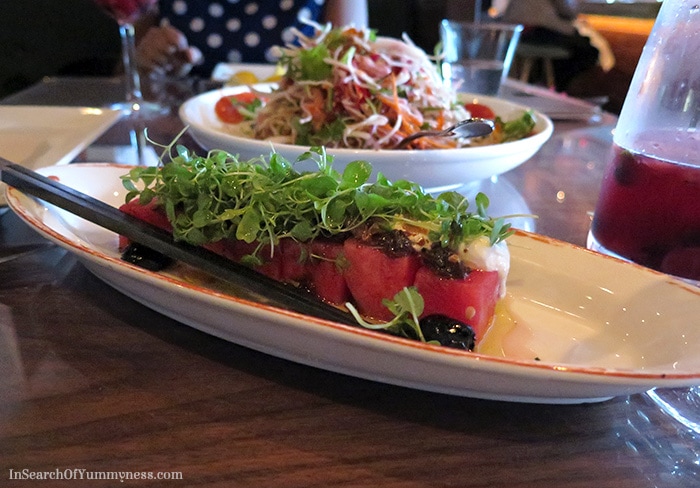 Then came the main course dishes. At Lee, hot dishes are always served after the cold ones. We started with the Roasted Assam Marinated Salmon which had a lemongrass emulsion, crispy noodles and ratatouille (eggplant, zucchini, red peppers, tomato). This was such a fantastic dish! The vegetables tasted very fresh, the fish was tender and had sort-of an Indian flavour to it, and the noodles had a spicy flavour which we all really enjoyed. 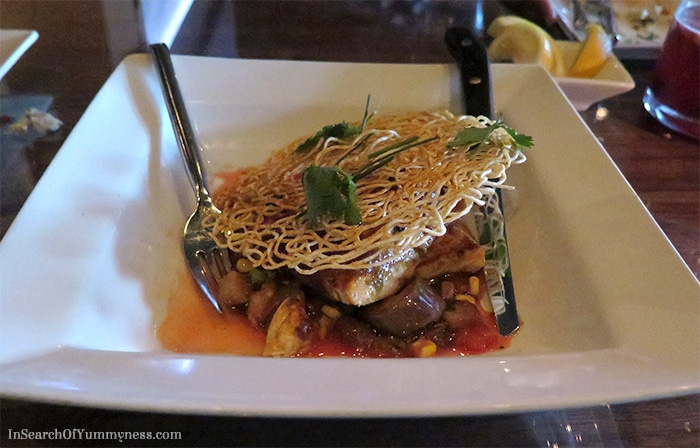 We also ate the Black Pepper Marinated Filet of Beef, which was tasty but not as interesting as the other dishes we had already eaten. The Red & Black Quinoa Risotto was creamy and rich, but although it was the best preparation of quinoa that I've ever had it still wasn't enough to make me like that grain.

Dessert was a real treat - no pun intended. The Summerlicious menu listed a trio of desserts, so you didn't have to choose between all the yummy options. We were each given our own plate at this course. From left to right, the photo below shows: 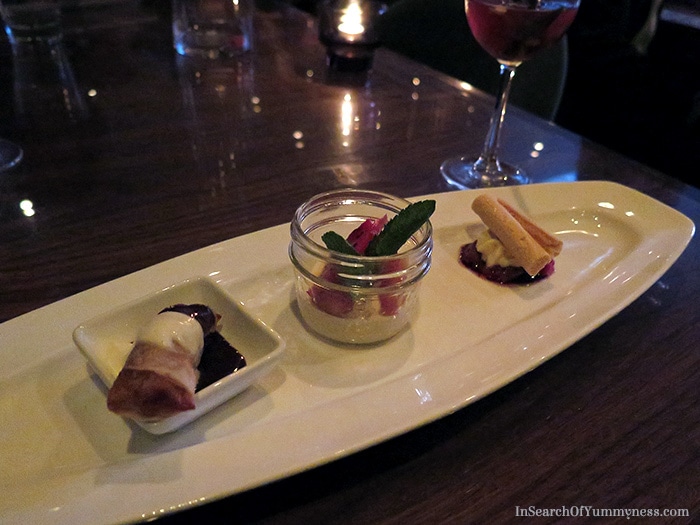 The spring roll was my least favourite, but it was still tasty. The crispy wrapper of the roll gives a satisfrying crunch when you bite it, and the warm sweet fruit filling sort of remind you of pie. The licorice meringue was so much better than I thought it would be (I don't love licorice usually). This dessert was very light, and had a strong sour flavour from the lemon and rhubarb which was a nice change from the other two desserts which were very sweet.

The white chocolate mousse was my favourite out of the three. It was so soft and creamy... although I'm pretty sure there were just sliced strawberries and dragon fruit sitting on top. The dragon fruit looked pink though, so maybe it was a compote. I'm not sure, and I don't care either. All I know is that it was delicious! I discovered this summer that I really enjoy desserts with white chocolate. There is something about that smooth light cocoa butter flavour that I love.

That wraps up another season of Summerlicious meals! I hope you were able to take part if you live in, or near, Toronto. If you did, please let me know where you ate!

P.S. My photo of the Singaporean-Style Slaw was featured in the National Post's Gastropost section today 🙂