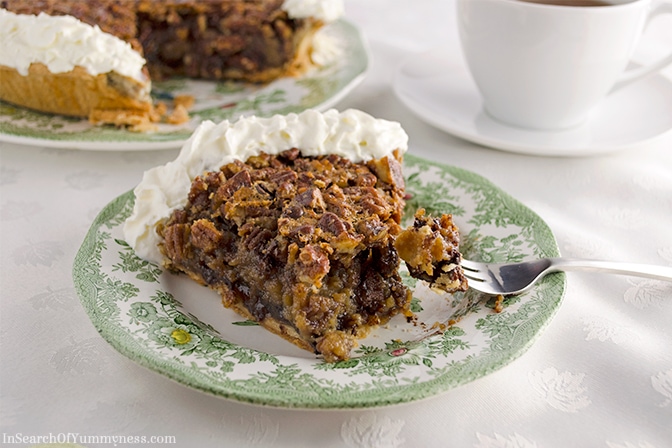 We are having some crazy weather here in Ontario today!

I just looked out of my window and it looks like a scene out of The Wizard of Oz. The sky is grey, the wind is picking up leaves and other debris, and it's pouring rain. Apparently parts of Toronto have already flooded as well.
Miserable weather requires delicious desserts - or at least it should. Everyone who had to deal with a flooded engine today should be sent a dozen cupcake to lift their spirits.

If you're having a frustrating day, I hope that photos of desserts will make things a bit better. Or at least distract you for a minute or two.

This recipe for Chocolate Pecan Pie with Maple Syrup is the result of an experiment. I love the pecan pie that I often purchase it from my local grocery store. It's nothing fancy, but it tastes great with vanilla ice cream. I was craving that pie this weekend, but really didn't want to go out to get it, so I decided to make my own.

I've never made pecan pie before, but I have made a nut tart so I figured it couldn't be that different. I found a few recipes in cookbooks that I have at home, but nothing looked like what I wanted. I ended up finding this recipe from Down Home with the Neelys, and I used that to create my own version.

The recipe I found called for corn syrup, bourbon and milk chocolate morsels. I didn't have any of those ingredients on hand, but I found some tasty substitutions. I used maple syrup instead of corn syrup, amaretto instead of bourbon, and semi-sweet chocolate chips instead of the morsels. I also used a pre-made frozen pie shell from Tenderflake to save time.

The resulting pie was pretty different from what I usually get from the store, but was good enough that I could share it here. 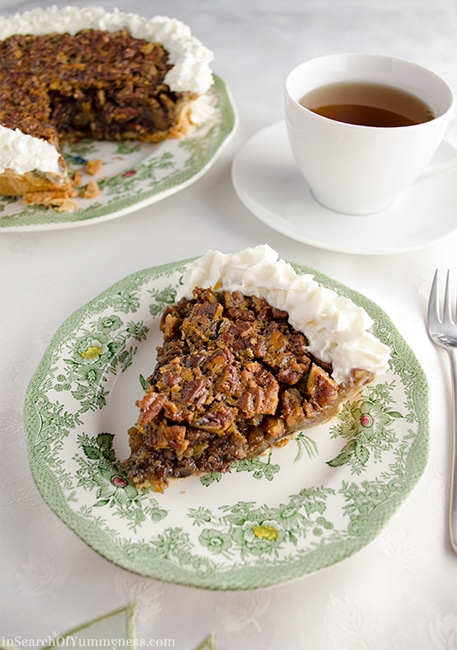 My pie ended up with a crunchy top and a gooey filling, which was fine by me. It's not traditional, but it does taste good with ice cream or whipped cream. I used whipped cream in my photos to hide where I damaged the crust. Whatever works right?

Also, I opted to chop my nuts into pieces for this recipe because I thought it would make the pie easier to cut. If you want a more traditional look, you should use whole or halved pecans.

I might make this pecan pie again for Christmas, because it's tasty, but it's probably better suited to Thanksgiving. There's still a few more days until American Thanksgiving, so if you're in the USA there's still time to make this yummy dessert 🙂 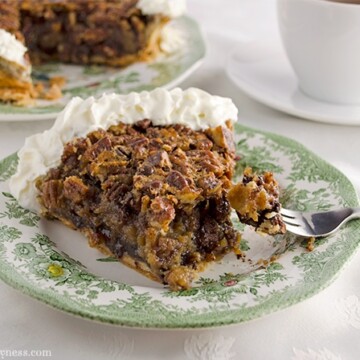 No ratings yet
Created By: Shareba
Prevent your screen from going dark
PRINT RECIPE PIN RECIPE SAVE RECIPESaved!

Disclosure:
This post has been sponsored by Tenderflake.
All opinions are my own.
This recipe has been adapted from: www.foodnetwork.com

More recipes you may enjoy